Water Filtration and Purification in the Wilderness

When the average person pictures "nature" he often imagines a nice clear stream from which one can drink. Most people believe that such water is much cleaner and safer to drink than anything that comes out of the tap in your house. This is not exactly true. While the water may seem clear, it is quite possible that it contains pathogens which can make your stay in the woods regrettable.
While I do not want to exaggerate the likelihood of contracting a pathogen from drinking unpurified water, the importance of cleaning your drinking water can not be understated.
What to remove from the water:
There are a few different things that one should remove from their water supply.
The first thing that you would want to remove is sediment and other particulate matter. There are several reasons to do that. The first is that most people do not enjoy chewing their water. Even if it has been sterilized, the taste of sand and frog’s eggs does not make for the best drink. The second reason is that the particulate matter may provide a hiding place for some pathogens, and make your preferred method of purifying your water ineffective.
The second thing you want to remove from your water is protozoans/parasites. The two main parasites that cause problems in North America are Giardia and Cryptosporidium. The danger is represented by the cysts which once ingested, develop into the parasite. They are relatively large in size, Cryptosperidum ranging from 4 microns to 6 microns, and Giardia from 8 microns to 20 microns. This makes them fairly easy to filter out, but they are very resilient to chemical treatments.
The third thing to remove from your water is bacteria. Some of the more common bacteria are E Coli and Salmonella. They can range in size anywhere from 0.2 microns to 10 microns. They are easy to both filter and kill chemically.
The last thing to be concerned about is viruses. In North America, they are hard to come by in the wilderness, but it is something to keep in mind. The greatest danger of viral infection occurs in areas that have contact with human waste. Viruses are extremely small, and range in size from 0.004 microns to 0.1 microns. Filtration is not a practical method for removing viruses, but chemical treatments are effective.
How to clean the water:
There are several different methods to clean your water, and each has different benefits. The methods most commonly used by the backpacker are Filtration, Purification, Boiling, and UV Light. 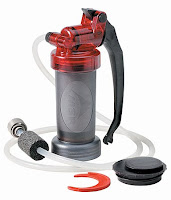 The first method is to use filtration. Good portable water filters will be able to filter down to 0.2 microns. That makes them effective against protozoans/parasites and bacteria. Such filters will not remove viruses. They are however great at sediment removal. Prices for portable water filters range from $80.00 to $120.00, and they may weigh anywhere from 8 oz to 20 oz. Do not be fooled by straw type filters. Many of them filter only down to 2 microns instead of 0.2 microns. Leading manufacturers of portable filters include MSR, Katadyn and Pre-Mac (combination filter and purifier).
The second method is purification. This entails putting a

chemical in the water, which kills the desired elements. There are several widely used purification methods, including Iodine (Potable Aqua), Chlorine (SweetWater), Mixed Oxidants (MIOX) and Chlorine Dioxide (Aquamira, Katadyn). Both Iodine and Chlorine treatments are effective against bacteria and viruses. Neither is effective against protozoans and clearly neither removes particulate matter. Chlorine Dioxide and MIOX are additionally effective against protozoans, but depending on water temperature, may take up to four hours to do so.
The third method is UV light. This includes devices like SteriPen,

which use UV light to kill the organisms. This method is theoretically effective against bacteria, viruses and protozoans. The effectiveness however, will depend on the clarity of the water. If there is a lot of suspended particulate matter, the device may not be effective.
The last and most traditional way for cleaning your water is boiling. Tests show that bringing the water to a rolling boil will kill virtually all bacteria, viruses and protozoans. Of course, it will not do anything to remove particulate matter.
It is worth noting that there are methods for removing particulate

matter from water other than using one of the above filters. These methods include using a Millbank Bag (a tightly woven material which filters out the sediment) or flocculating agents such as Chlor-Floc and Alum, which make the particles settle to the bottom of the container.
The method you decide to use will in part depend on the conditions in your area. If for example most of your water will be obtained from a swamp, filtration might be something to strongly consider. Keep in mind, purified swamp water is still swamp water and tastes just like you would expect.
Posted by bella at 12:00 PM