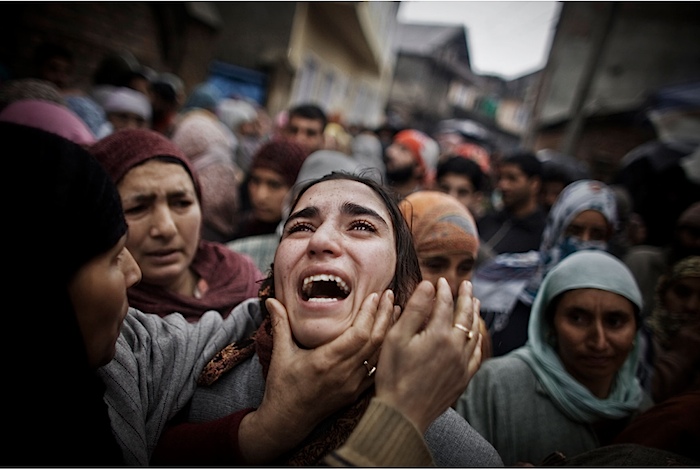 Photo © Daniel Berehulak-All Rights Reserved
Daniel Berehulak is based in New Delhi, working for Getty Images News Service and covering the South Asia region and beyond. He joined Getty Images in 2002 in Sydney and relocated to London as a staff news photographer in 2005. Daniel’s work is regularly published in major newspapers and magazines worldwide, including The New York Times, The Washington Post, The Los Angeles Times, The Wall Street Journal, The Guardian, The Independent, The Times, Stern, Time, Newsweek and many more.

With his image (the B&W version) of a Kashmiri girl mourning the death of teenager Zahid Farooq during his funeral on the outskirts of Srinagar, Daniel was awarded First Prize: News Folio of the Year in the Press Photographer's Year 2010, which is the only competition to showcase the best photography used exclusively by the UK media.

I recommend not only his arresting (and recent) photographs of Kashmir, but also his lovely medium format work in the gallery titled I-ncredible India....especially the photograph of the two Muslim boys reclining on some blankets in an Ahmedabad storefront.

My thanks to Eric Beecroft for the heads-up.
Posted by bella at 2:34 AM