QuikClot is a fairly new technology that has recently become affordable enough for civilian consumption. It is a hemostatic agent, designed to rapidly cause blood clotting and stop severe bleeding. It was originally tested and used in the current Afghanistan and Iraq wars by the military and has proven to be an enormous improvement over traditional bandages. 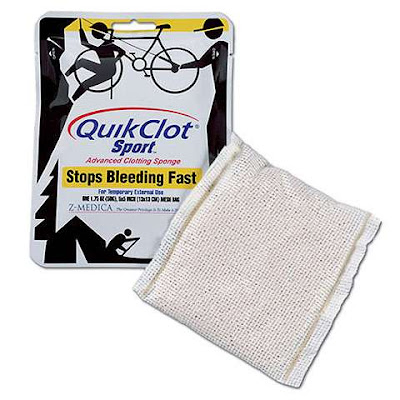 The original product was a powder that was poured into the wound. The newest product, including those for civilian consumption come in sponge form. While I am not smart enough to understand the chemical reactions that occur to stop the blood loss, the product is basically used by placing the sponge right on top of the source of bleeding. It quickly causes the blood to clot. It is very effective on exposed, open wounds such as those caused by an axe slamming into your shin. It will even stop direct arterial bleeding.

One thing to keep in mind is that the reaction which allows the clotting is exothermal, meaning it produces heat. While the newer products claim to minimize that effect, you will feel it. This is not a treatment for minor cuts and scrapes. This is a truly life saving device to be used on severe wounds. For the outdoorsman, it can serve to replace large amounts of traditional bandages and even tourniquets.

It is sold by the manufacturer, and can be purchased here: http://www.quikclot.com/catalog.cfm?dest=index Prices vary from $10 to $30 dollars depending on size and type of product. A 25 gram packet comes in a sealed 3 in by 3 in packet.
Posted by bella at 1:51 PM