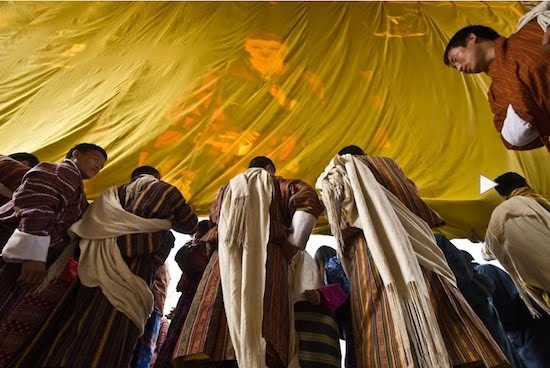 Photo © Dede Pickering-All Rights Reserved
Dede Pickering has just returned from Bhutan with a collection of new photographs, which she posted on her Bhutan Gallery. She traveled in that Himalayan country from its west to its east and trekked in the rarely visited Sakten Valley.

I chose Dede's lovely photograph of the unfurling of a thongdrel for this post. The thongdrel is a large tapestry typically depicting a seated Guru Rinpoche surrounded by holy beings, the mere viewing of which is said to cleanse the viewer of sin. During tsechus, it's unrolled before dawn and rolled up by morning.

Having retired from the corporate world, Dede became a world traveler and photographer. She has traveled to Antarctica, Mongolia, Tibet, Nepal, Bhutan, Burma, China, Cambodia, Peru, Patagonia, Kosovo, Albania, Rwanda, New Zealand, Guatemala, South East Asia and has made multiple trips to Africa and India, but her passion is the Himalayan Region.
Posted by bella at 2:13 AM