How to Light and Operate a White Gas Stove

Some of the most popular and widely used backpacking stoves are the what’s called White Gas stoves. They operate on a fuel that closely resembles gasoline, called white gas or the very similar naphtha. They have excellent performance, but can be a challenge to operate, which turns away many people. With a little practice however, anyone can master these stoves. Here I will go through the lighting process for one of them. I will be using the MSR Whisperlite International stove for this demonstration.

The first thing you need to do is connect the stove to the fuel bottle. 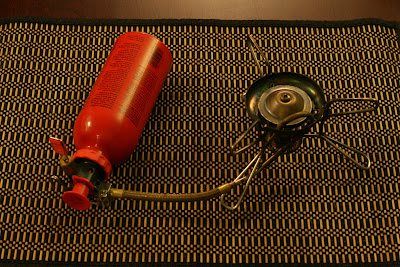 Then pump up the fuel bottle to pressurize it. I find that 10-15 pumps is enough. If you find that the pressure is low, you can always pump it up some more while the stove is burning. 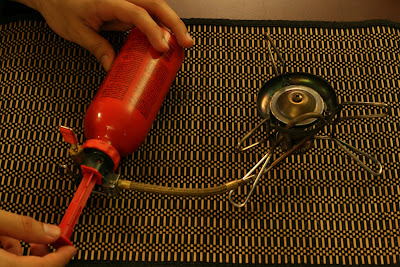 Just like with most liquid fuels, it is not the liquid itself that burns, but rather the fumes from the fuel. Since this type of stove uses liquid fuel, the fuel must first vaporize before you can get an efficient burn. That is done by preheating the stove. One way to preheat it is to open the valve of the fuel bottle, and let some of the fuel leak out into the small priming pan at the bottom of the stove. When you light that fuel, it will burn and preheat the whole stove. I am not a big fan of using the stove fuel for preheating because it gives off a lot of smoke and turns the whole stove black. (When the fuel is vaporized, it burn cleanly) What I like to use for the priming is denatured alcohol, the same type used in alcohol stoves. I keep some of it in a small spray bottle. I use the alcohol to fill up the stove’s priming cup. 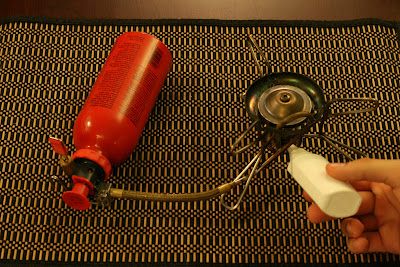 Light the alcohol, and let it do its job. 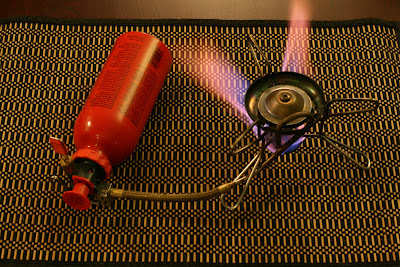 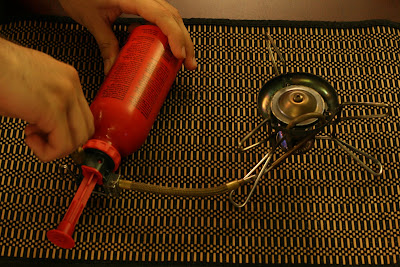 The second way to do it is to let the alcohol burn out, then open the fuel valve, and light the fumes at the top of the stove with a match or lighter. 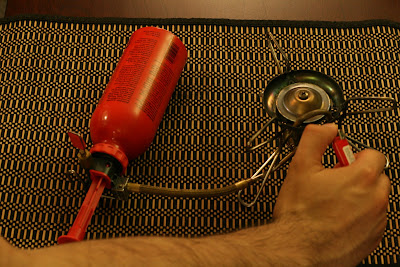 If you have not pumped up the fuel bottle too much, you should be able to regulate the intensity of the flame by adjusting the fuel knob. 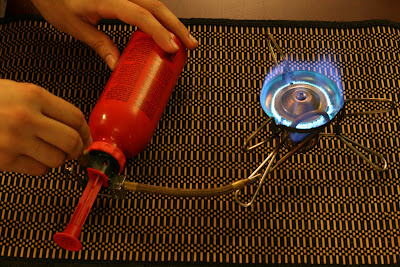 There will be variations between different stoves. Look at the directions to see where the different components are located. Some stoves will have a second valvue closer to the stove to allow for greater control. You will have to open and close it as well. The theory however remains the same with most white gas stoves.
Posted by bella at 10:33 AM