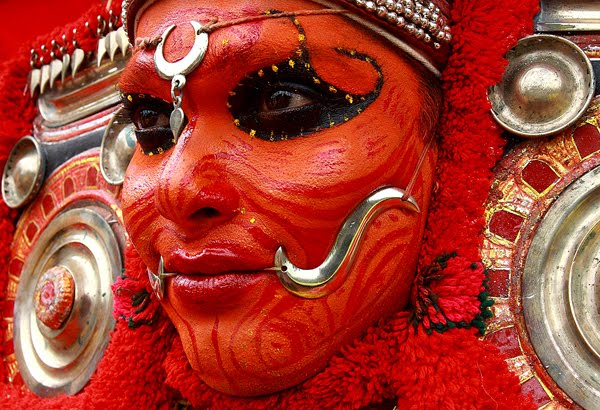 Photo © Sivaram V./Reuters-All Rights Reserved
The Wall Street Journal's Photo Journal has this striking photograph of a dancer about to perform during festivities marking the start of the annual harvest festival of Onam in Kochi, India. The festival symbolizes the return of mythical King Mahabali to meet his beloved subjects.

Readers and followers of this blog and my work will immediately recognize that this is Theyyam performer who, as those I've photographed last January, and can be seen in my Theyyam gallery, is part of an indigenous religious tradition in the north of Kerala.

However, I wasn't aware that Theyyam rituals are performed during Onam, which is the state festival of Kerala. The festival includes snake boat races, Pulikali (tiger) dances and processions of caparisoned elephants. It is celebrated in honor of Mahabali, the mythical Asura king of ancient Kerala, and falls during August or September....but Theyyam rituals during Onam? Ah well, I learn something everyday.
Posted by bella at 3:00 AM