Using a macro for holiday snaps

It's holiday time. This year we had the opportunity for a week by the sea, in Swanage.
This raised the question of whether to take my new Sigma macro lens. I naturually assumed that I would mainly use the kit lens that came with my Sony Alpha 350. It's a DT18-70mm F3.5-5.6, which means it's a basic zoom lens.
However, my Sigma macro was already on the camera and I decided to leave it there. I'm not certain how much dust enters a camera body whenever the lens is changed, but currently I'm being careful not to change too often.
On arrival in Swanage I decided to start taking pictures with the Sigma lens. It's supposed to
give good landscape results. After a little while I got used to the fact that it wasn't a zoom and if I wanted to get closer to a subject I had to physically move. It also did not give me the same wide-angle options as the zoom. 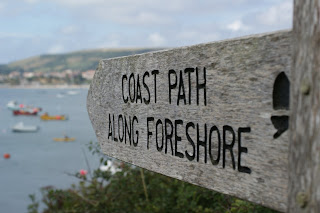 But you can learn to live with that. I downloaded the results, and I was impressed.
What clinched it was a comment by my thirteen year old daugther. She observed that the pictures looked more realistic because the buildings did not have curving walls. She was referring to
what's called barrel distortion, which results in straight lines becoming curves in photographs.
Barrel distortion tends to occur using wide angle lenses, or the wide end of a zoom lens. Apparently it's relatively easy to fix with software, but I prefer the pictures to come out of the camera without the need for post-processing.
I decided to stick with the Sigma macro lens for the rest of the week. I took some great portrait shots and landscapes, and it allowed me to get really close to subjects. It suited my style of photography.
There's a lot more that I want to write about. But the message of this post is simple - a macro lens works perfectly well as a general-purpose lens; it's not just for close-up work.
All the pictures in this post were taken with my Sigma 50mm macro.