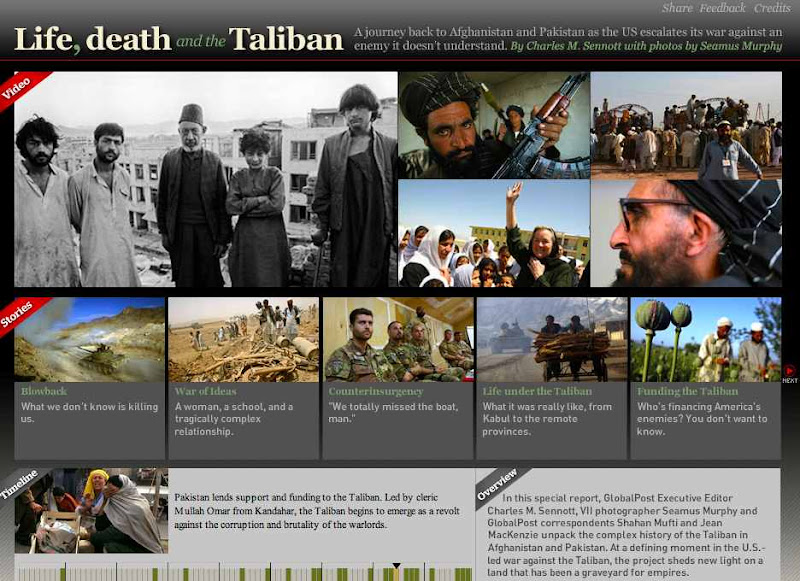 With so much in the news about Afghanistan, I thought I'd join the fray and feature this collaboration between GlobalPost and MediaStorm.

According to its producers, Life, Death and the Taliban seeks to "enhance America’s understanding of Taliban history in Afghanistan and Pakistan". Charles Sennott of GlobalPost reviews the group’s rise to power and looks at current political and counterinsurgency efforts in Afghanistan.

To cut through through the constant rubbish, biased and lazy reporting, and outright misinformation fed to us by the US mainstream media is a tall order, and as evidenced by the convoluted, and sometimes awkward, reporting in this piece, there are many facets to the Taliban. While I don't dispute GlobalPost's intentions, I also look forward to the day when our media is willing and able to report the current events in both Afghanistan and Pakistan without bias and preconceived notions. Will it be after the fact, as with the war in Iraq? Time will tell.

Photographer Seamus Murphy, who has long chronicled the shifts of power in Afghanistan, accompanied Charles Sennott to Kabul for this report. The project includes several stories and video pieces.

For Seamus Murphy's powerful images of Afghanistan, go to A Darkness Visible featured by The Digital Journalist.
Posted by bella at 12:21 AM