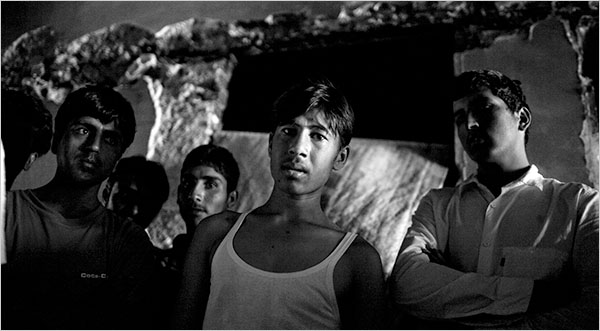 “Afghanistan is hemorrhaging its youth into Europe” said Pierre Henry, director of France Terre d’Asile, an organization that works with the European Union, the United Nations refugee agency and the French government on asylum affairs.

As per The New York Times' The Lost Boys of Afghanistan, one of the consequences of the war in Afghanistan are the young (some as young as 12) refugees who seek an education and a safe future currently impossible in their own country. It appears that the European nations where these youngsters seek refuge are obliged under national and international law to provide for them; adding a few thousands to the many more of illegal migrants.

The photographs are by Moise Saman, and the accompanying article is by Caroline Brothers.

I'm mildly encouraged in reading that Admiral Mike Mullen, the chairman of the Joint Chiefs of Staff has recently written a critique "of government efforts at “strategic communication” with the Muslim world, saying that no amount of public relations will establish credibility if American behavior overseas is perceived as arrogant, uncaring or insulting."

Perhaps similar and concerted efforts by our current administration will slowly redress the blight caused by the previous administration's actions on the Muslim world....it will take a lot of time and effort, but it's a step in the right direction.
Posted by bella at 4:00 AM