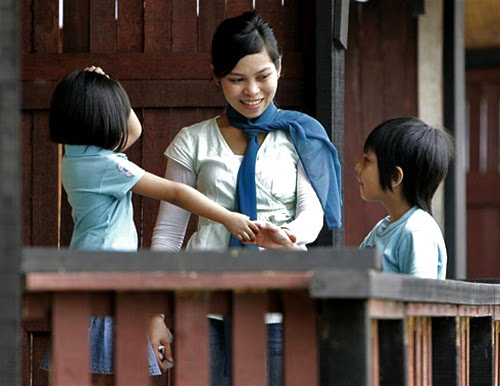 Photo © Zainal AbdHalim/Reuters-All Rights Reserved
Reuters Photographers Blog has a post on a Muslim woman who is scheduled to be caned next week in Malaysia for committing the offence of drinking beer in public. Kartika Sari Dewi Shukarno will be the first Malaysian (other news outlets report that she's from Singapore) woman to be caned under Islamic laws (Sharia') applicable to Malaysia’s Muslims, who account for about 60% of its population, and is fueling a furious debate over tolerance in this multi-racial country.

Kartika Sari Dewi Shukarno has asked that the punishment be carried out in public in an attempt to shame the Malaysian authorities, and Reuters is asking photographers to let them know how they would go about photographing this punishment. Reuters editors and photographers in Malaysia will have to make these decisions next week.

If I were to photograph this shameful event, I would focus my lenses on the faces of those who are carrying out the sentence. The policemen, the guards, those who represent the Sharia' authorities, every single person (presumably they'll all be men) in that room...and record their facial expressions and posture while Kartika is being submitted to this atrocity. Although I've read that the caning itself is expected to be "light" and just symbolic, it's also symbolic of a backward thought process that needs to be exposed and shamed. And let us be clear...this is not Malaysian secular law, but Sharia' law that decreed the punishment.

If God is "angry" at Kartika because she drank a couple of beers, let God "punish" her...not some hypocritical Malaysian imams who interpret Islam according to their whims. Justice and compassion are central pillars of Islam, and neither the Qur'an nor the teachings of the Prophet Muhammad prescribes any form of punishment for drinking alcohol.

Update (8.24): Malaysia abruptly granted a Ramadan reprieve to the first Muslim Malay woman to be sentenced to caning for drinking beer, but insisted the thrashing would still take place after the Islamic holy month of fasting.