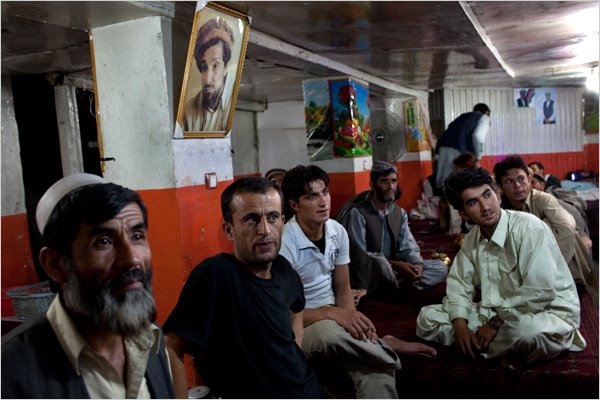 Photo © Tyler Hicks/NYTimes-All Rights Reserved
The New York Times is featuring Tyler Hicks' photographs of the currently under way Afghan elections in a slide show titled A Precarious Election. The accompanying article is by Carlotta Gall, and this caught my eye:

"With Taliban insurgents active in half the country, many Afghans remain doubtful that the Aug. 20 election will take place at all. The Taliban issued a statement last week calling for a boycott, a threat that could deter voters in much of the south, where the insurgency is strongest."

Reading the rest of the article, i couldn't help wondering if what we describe as the so-called Taliban are merely Pashtuns who are alienated from the increasingly corrupt government infrastructure. The pervasive and venal governance of Hamid Karzai and his acolytes is well documented, and the electoral results will surely reflect not only "irregularities" (as the New York Times rather quaintly describes them) but outright fraud. This does not bode well for Afghanistan.

I was also struck by the above photograph showing the portrait of Ahmad Shah Massoud, the Lion of Panjshir, prominently displayed. If he hadn't been assassinated in 2001, Afghanistan would look very different than it is today.
Posted by bella at 1:24 AM