Three participants in my Intro To Multimedia Storytelling class at the Foundry Photojournalism Workshop (FPW) produced stunning slideshow photo essays, and I thought it would be interesting to write about their contrasting photographic and personal styles.

I taught my class' participants to concentrate on the story, rather than on the application, and how to make quick work of slideshow production (SoundSlides), using their own images and audio generated in the field, and to produce a cogent photo story under the simulation of publishing deadlines.

Except for Dhiraj's slideshow which is already online (see below for link), the two remaining slideshows will appear on The Travel Photographer when Mohit and Yasin upload them on their own websites/blogs. 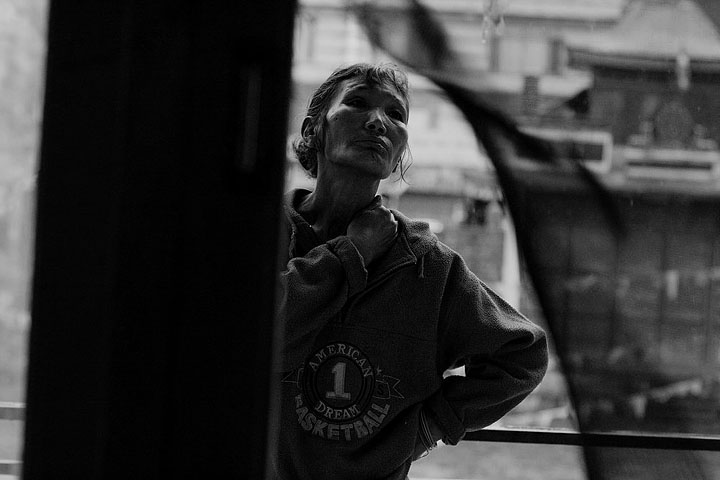 Dhiraj Singh is a photojournalist and editorial photographer in Mumbai, whose work has appeared in various international publications including Newsweek, Vanity Fair, The Wall Street Journal, MSNBC among others.

For My Name is Dechen, a gripping tale of Tibetan woman afflicted with psychological problems, Dhiraj received the top student award for photography during the Foundry Photojournalism Workshop's final evening. He worked incredibly hard and creatively to produce this multimedia black & white photo essay. He was already quite comfortable in producing slideshows using SoundSlides, so it was a matter of editing his images, and sync'ing Dechen's audio with the stills.

Dhiraj quickly grasped the flip book technique, and inserted well-paced scenes of Dechen singing and dancing. No one can produce such an intimate photo essay unless he or she possesses the interpersonal skills to gain the confidence of the subject. There's no question that Dhiraj's work with this photo essay underscores his inherent compassion (he confided to me that he teared up more than once while photographing Dechen), patience and kindness.

Here's is the complete multimedia My Name Is Dechen. 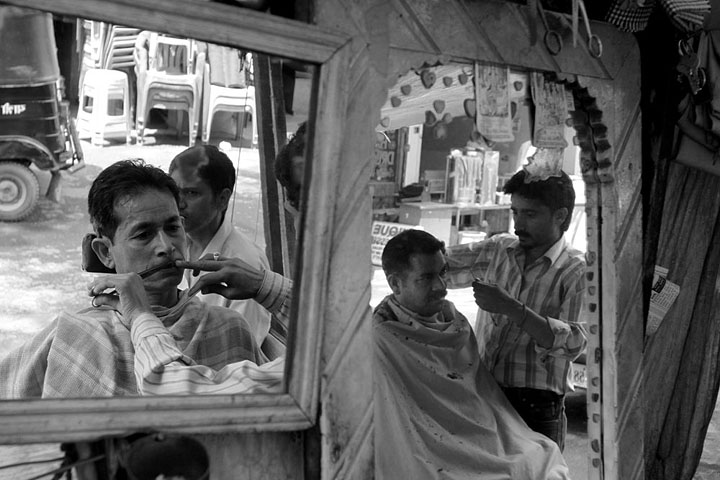 Yasin is an award winning photojournalist, and stumbled into photography after studying computers in South Indian city of Bangalore. He contributes regularly to the Associated Press and Onasia, an international news agency based in Bangkok. His work appears in leading international publications including Washington Post, New York Times, Time Magazine, and others. He won international and national awards recognizing his work.

He participated in a FPW panel discussing the difficulties of photographing in South Asia, and explained that by living in Srinagar, he was confronted on a daily basis with unimaginable violence and bloodshed. It was therefore very interesting from my standpoint (and presumably, from his) to see him tackle a comparatively sedate and non challenging task as photographing and interviewing a street barber in Manali. Used to dodge bullets, canisters of tear gas, policemen's lathis and demonstrators' abuse, Yasin smilingly told me that this assignment "felt different".

As I wrote in an earlier post, Yasin photographed and recorded his chosen project in an hour or so, basing it on the One in 8 Million series of the New York Times. 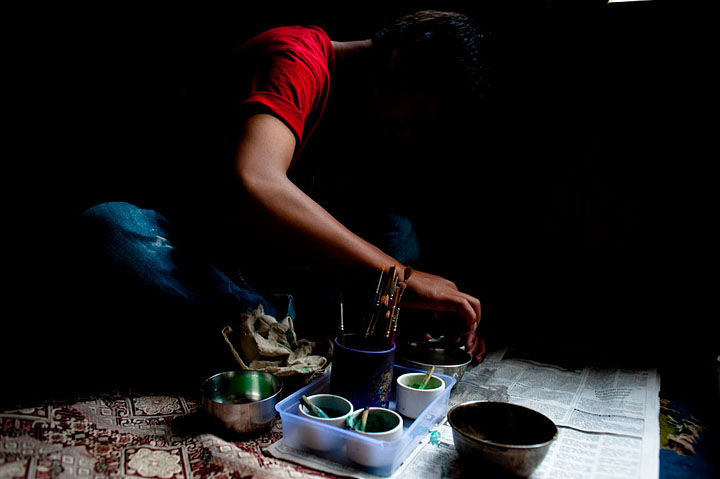 Originally hailing from Himachal Pradesh, Mohit Gupta is an independent photographer based in New Delhi, who specializes in travel and documentary photography. He received his tertiary education in one of India’s most prestigious engineering schools – BITS, Pilani, and upon completing his studies in Computer Science in 2001, he joined Adobe Systems. It's a no brainer as who was the man to go to when anyone in our class needed technical assistance!

For Mohit, photography is a serious medium for expression. A self taught photographer, he is mainly interested in documenting culture, traditions, rituals and religion, and has traveled within South East Asia to do just that. He also works with NGOs and helps them documenting their work.

A perfectionist with a keen visual eye for colors and shadows, Mohit spent a number of days improving his presentation. Not easily satisfied, he was constantly refining his audio recordings until he got what he wanted, and then spent hours sync'ing it as precisely as humanly possible.

As I said in my opening remarks at the Foundry Workshop, I learned from the class participants much more than they did from me. I hope it's obvious why.
Posted by bella at 10:48 PM