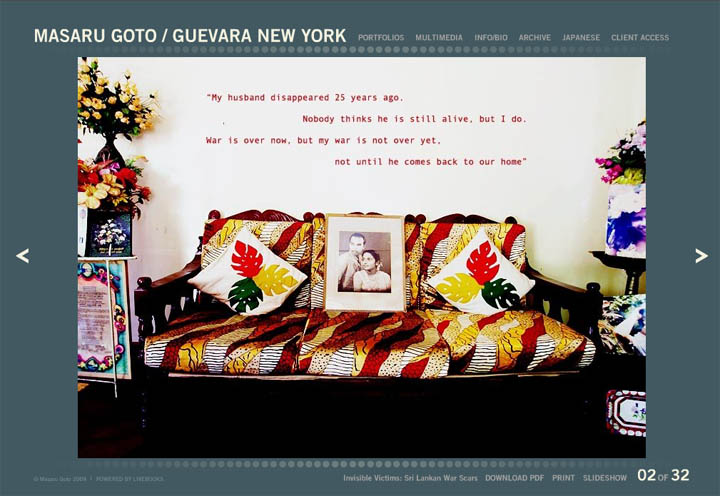 The conflict between the Sri Lankan government and the Liberation Tigers of Tamil Eelam (LTTE) has lasted nearly 30 years, and is one of the longest-running civil wars in Asia. The Tamil Tigers want an independent state for the island's Tamil minority but after a year-long military offensive, the Sri Lankan government recently claimed that it had defeated the separatist group, and killed its leader.

Masaru has 19 years experience photographing social and human rights issues in Southeast Asia and South America, and he made it his mission to highlight the plight and resilience of ordinary people who are caught in conflicts, suffering under oppression or economically disadvantaged.

In 2002, Masaru won the prestigious Fifty Crows Foundation award for Documentary Photography for his photos essay on Human Rights in Colombia “got rights? Human Rights in Colombia”. His photography books include “My Journal of Cambodia 1997-1998”, a photographic essay about the final years of civil war waged by the Khmer Rouge and “Smile in Despair: Stories from a Cambodian AIDS ward” on the HIV/AIDS crisis in Cambodia. In 2004, his images of HIV/AIDS in Cambodia won two of the category, "LOVE" and "ILLNESS" for "the River of Life" World Health Organization (WHO) photo competition.
Posted by bella at 2:30 AM