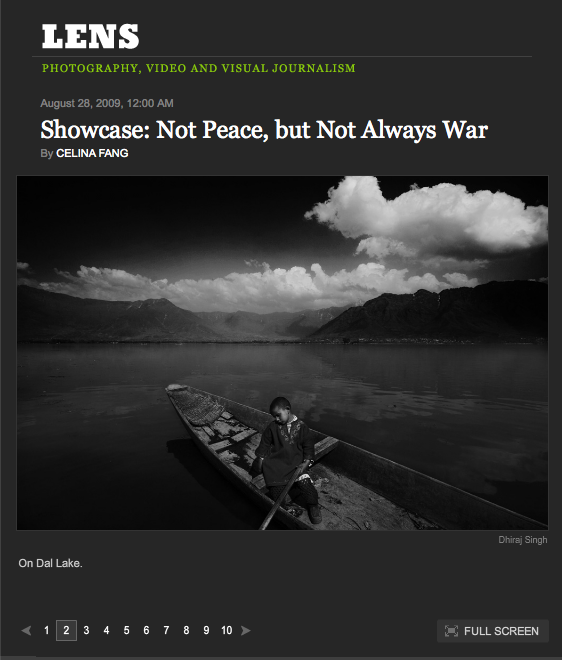 It is with considerable gratification that I learned this morning that Dhiraj Singh's work has appeared on The New York Times' LENS blog. A few of of us had known that this was in the works while we were at the Foundry Photojournalism Workshop, and it materialized as we hoped it would.

Dhiraj, as readers of this blog now know, attended my class "Introduction To Multimedia Storytelling" at the workshop, and produced an absolutely stunning photo essay, for which he was deservedly honored for by winning the workshop’s top honors for student work.

His beautiful black & white work on Kashmir is now featured on the LENS blog, in which seeks to document a Kashmir that is defined by more than the decades-long dispute between India and Pakistan over the area. It's worth your time to read Dhiraj's interview as well, which tells us this, among other information:

Mr. Singh, 32, was born and raised in Mumbai. He was a storyboard artist for an ad agency until 2007, when he took a job shooting for Daily News & Analysis (DNA), a national daily. “I was always fascinated with photography,” he said, “and felt that if I did not take the risk and give myself a chance, I would’ve surely lived to regret it.” His work has since appeared in Newsweek, Vanity Fair and The Wall Street Journal.


May good things continue to happen to Dhiraj.

Dhiraj Singh's website is here.
Posted by bella at 4:12 AM