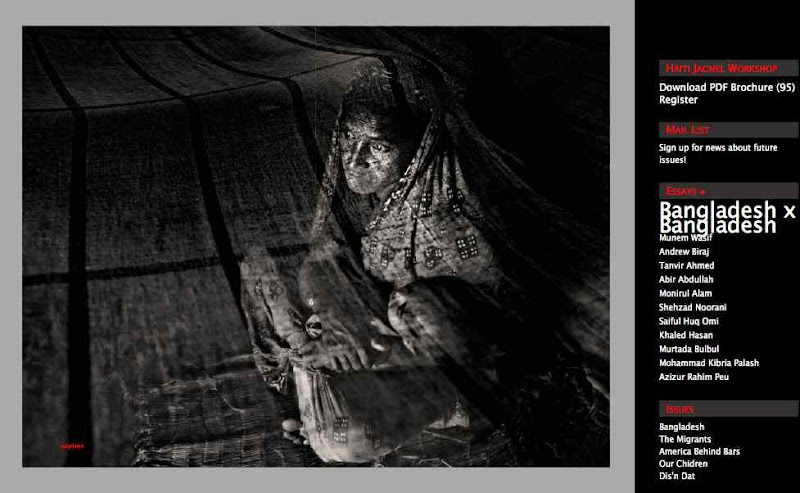 I'm surprised that it seems I haven't yet mentioned 100Eyes ...along with one or two other similarly oriented photography magazines, it's one of the best on the internet. This issue is all about Bangladesh and Bangladeshi photographers.

100Eyes is Andy Levin's brainchild. Andy was a contributing photographer with the original Life Magazine, and started his career as a staff photographer for the Black Star agency in 1985, where he completed contract assignments for magazines including National Geographic, Time, Newsweek, and Fortune. He was awarded numerous awards and recognitions, and is now involved with various projects in New Orleans.

There is no question that there is a Bangladeshi school of photography, which was strongly influenced by Shahidul Alam, the photography icon in the country. The photographers whose work are shown here are Munem Wasif, Andrew Biraj, Tanvir Ahmed, Abir Abdullah, Monirul Alam, Shehzad Noorani, Saiful Huq Omi, Khaled Hasan, Murtada Bulbul, Mohammad Kibria Palash and Azizur Rahim Peu....many of them well known in international photography circles.

Andy reasserts (a fact that many of us have recognized) that indigenous photographers are able to achieve an deep intimacy with their subject, as follows:

"If there is a message in the emergence of “indigenous photographers” it is that these photographers are able to achieve an intimacy with their subjects which enhances their humanity rather than objectifying and reducing the disadvantaged to stereotypical images of suffering."