I’ve been contemplating writing a few posts on my gear and clothing because I get a lot of questions about it, but before I do that, I wanted to go over some of the theory behind why I do what I do. In particular, in this post I want to go over my theory on clothing, and specifically on selecting cold weather clothing. 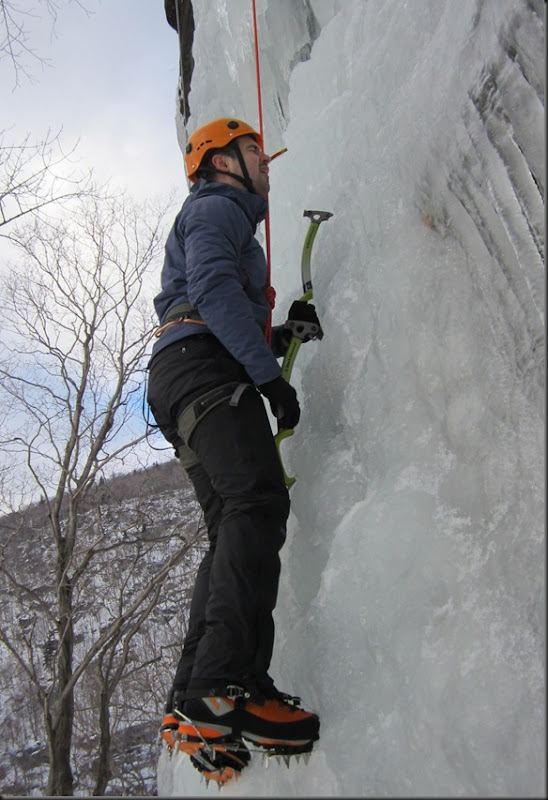 No! I didn’t stab myself in the crotch with the ice tool. My arms were just in a lot of pain so I was getting some rest. :)

For a long time now, the layering principle has been the accepted norm for outdoor clothing. The theory states that you start with a thin base layer, which is designed to wick the moisture/sweat away from your body. On top of that you have a mid layer which provides the insulation. This mid layer can be comprised of a number of different pieces of clothing until you get sufficient insulation for the environment you are in. On top of that, as a final layer, you have a shell of some sort or anorak which protects you from wind, rain, etc. In some cases you will add an over-jacket for added insulation. If you become too warm, you remove a piece of the insulating clothing. If you get too cold, you put on another piece of clothing.

In more recent years a competing approach to clothing has started to emerge. The idea is generally attributed to Mark Twight. I’m sure the approach was around before him, but he certainly coined the term in his book Extreme Alpinism: Climbing Light, Fast, & High. He called it the Action Suit principle. The two systems are nearly identical at first glance. They are both comprised of the same components, base layer, insulation layer, shell layer, over jacket, etc. The difference however comes in the realization that with certain outdoor activities, Mark Twight was talking about climbing, but I find it equally applicable to backpacking, the heat output from the human body is not constant and continuous. Unlike a regular layering system that changes insulation by increments, and requires continuous adjustment, the Action Suit theory assumes that you will experience periods of time of high exertion when you body produces a lot of heat, followed by periods of rest when your body cools down rapidly. I have found that to be very true of backpacking as well as climbing.

So, the approach focuses on creating an “action suit”, which will allow you to remain thermally neutral during periods of high activity. Just like with a regular layering system, you have a wicking base layer, an insulating layer, and possibly a shell layer to protect you from rain and wind. The insulation in the action suit is supposed to be the minimum required to keep you thermally regulated when moving. In most conditions that requires very little because even in extremely cold conditions the body produces very large amounts of heat. It is not uncommon to see people skiing to the South Pole in just a base layer. The second component of the system is a highly insulating outer layer. Climbers call it a belay jacket, but we can use whatever term we want. This jacket is put on over all of the other layers the moment you stop moving.

It is this separation of the clothing system into pieces designed for insulation when moving and ones designed for stationary activity that for me marks the Action Suit system. I think this approach more correctly captures the insulation requirements of an active person in the outdoors, whether we want to call it climbing, backpacking, or bushcraft.

There are some issues however that become evident when using this system that are often overlooked when talking about traditional layering principles. The main issue for me is storage of this second set of clothing designed for stationary activity. After all, the whole point of the system is that you are moving while wearing relatively limited and light clothing. The heavy insulation has to be stored somewhere until needed. The result is an outer layer that is light and easily compressible. Bulky and heavy parkas of decades past simply will not do. The moment you start moving, you have to remove that jacket and place it in your pack. If you can not do that, then it is not much good. The ability to pull out the stationary/heavy insulation and put it on the moment you stop moving, and subsequently take it off and quickly pack it away once you are ready to move on, and do it in an efficient and fluid manner is of extreme importance.

Very often you will see people start out into the woods with heavy outer jackets or numerous insulating layers under an oversized anorak-type shell. They are immediately limited in what they can do in the woods, or in the alternative, are planning on only being stationary in a camp site. Since they have no easy way to take off that jacket and store it in their pack due to its size and weight, they have to bring their mobility down to a minimum in order to prevent severe overheating. Anyone who has done any walking in the woods knows that even basic tasks and movement will generate large amount of heat. Alternatively having to stop and remove an outer shell just to adjust the insulation layers underneath, is highly inefficient and allows much of the stored heat to escape. When trying to put on more insulation, often times the heat lost from stopping and removing the shell layer/anorak will outweigh the warmth gained from adding more insulation.

It is important to remember that both components of the system, the active and the stationary, can be modified and adjusted for different conditions. The action suit I will use in 0F is very different than what i would use at –30F. The –30F action suit understandably has more insulation, but still just enough to keep me thermally regulated when active. Similarly the outer insulating layer can be thicker or thinner depending on what the conditions require. In warmer weather it will not be needed at all.

So, how does all of this translate into practice? Well, I’ll try to make a post about my clothing so you can see exactly what components I use, but until then, there is an excellent article by Andrew Earle called What to Wear for Winter Hiking and Climbing. In there he gives recommendations for individual clothing items. I think he is right on the money.