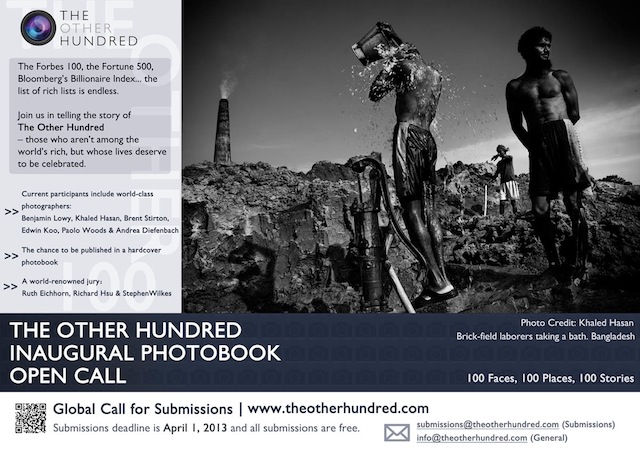 Here's an worthwhile open call for photographs from The Other Hundred, which is an initiative of the Hong Kong-based Global Institute for Tomorrow. The intention of the open call is to to tell the story of people who are far from being the world’s wealthy, but whose lives deserve to be celebrated.

The Other Hundred is interested in photo submissions from all corners of the globe, and hopes to attract both professional and amateur photographers so the project can consist of as many contributors with as different perspectives as possible.

The Other Hundred will be published as a book of 100 photo essays featuring the hardships and triumphs experienced by extraordinary but simple people that remain anonymous and unknown.

The book is due for publication in October 2013, and will use images from world class photographers as well as from open submissions via the internet.  Proceeds from the publication of the photobook will be donated to organisations dedicated to addressing social issues and inequality across the globe.

The winning entrants whose photographs are published in the book will receive a US$300 honorarium, and the deadline for submissions is April 1, 2013.

The jury is made of Ruth Eichhorn, Richard Hsu, Stephen Wilkes, Chandran Nair, Simon Cartledge, and Stefen Chow.
Posted by bella at 2:00 AM