Just like with backpacks, I don’t do a lot of reviews of shelters simply because I do not test a lot of them, so it is hard to do good comparisons. In this post however I want to go over what I currently use as my shelter.

As a bit of background, the first time I went into the woods here in the US, I had with me a Kelty Gunnison 2 tent. It was a good tent, but I used it only once. I just hated being inside a bubble while in the woods. For my next trip, I switched to a tarp and donated the tent. I used a tarp for a long time, but started having issues with it in winter. It just offered very little wind protection, and the closer to the ground I pitched it to compensate for that, the less usable space I had. It doesn’t matter what type of pitch I used, as long as there was a side opened, the wind would get in and make things miserable. So, eventually I switched to the GoLite Shangri-La 5. It offered the best of both worlds. Just like a tarp it had no floor, so I could run a stove, not worry about snow or mud and generally do anything that I would do under a tarp. On the other hand, it offered great wind protection much like a tent.

I used the Shangri-La 5 for quite some time, but about six months ago I switched to the Shangri-La 3. This was done for only one reason. The Shangri-La 5 was just too large. The extra space was great, but in my area I was having a very hard time finding open spaces large enough to pitch it. I went with the Shargri-La 3 because it was an identical tent, simply with a smaller footprint. 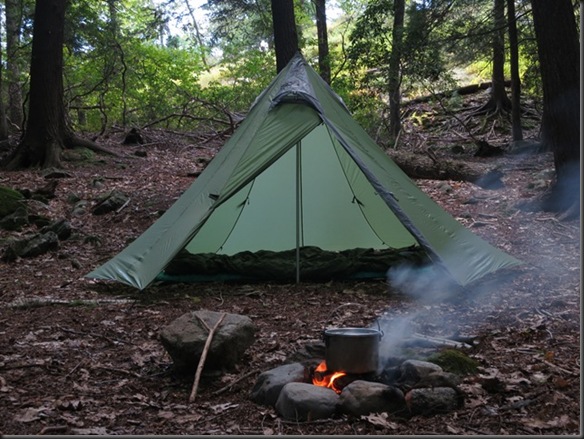 To be more precise, I only use the Shangri-La 3 flysheet, pole and tent pegs, the same way I did with the Shangri-La 5. Both tents actually come with a nest, which includes mosquito netting and a floor that gets inserted under the flysheet. Not only do I have no use for it, I find that it creates just a regular tent which is exactly what I don’t want. It’s extra weight that in my opinion gives me a worse shelter. It used to be that GoLite sold the nest for both tents separately, but these days they are sold as a set. Not to worry though, the price has not gone up at all. GoLite moved their distribution in house, so they managed to keep the costs down.

Now, for some details. The GoLite Shangri-La 3 sells for $250. They are currently out of stock, but they will have new ones in a few months. The full tent, together with the nest weighs 4 lb 5 oz. However, with the set up that I use (the flysheet, pole and tent pegs) it weighs 2 lb 3 oz. The pole itself weighs 11.2 oz.

Since you guys have seen me use the GoLite Shangri-La 5, I figured I would give you some side by side stats on the two tents. If you want to see more details about the Shangri-La 5, check out this post.

For comparison purposes, here are two pictures with me next to the Shangri-La 3 and Shangri-La 5 respectively. 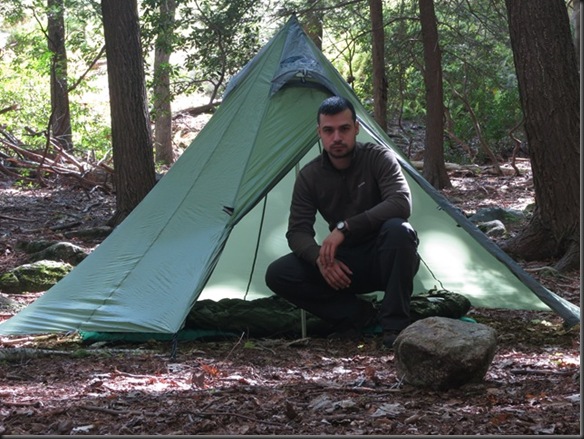 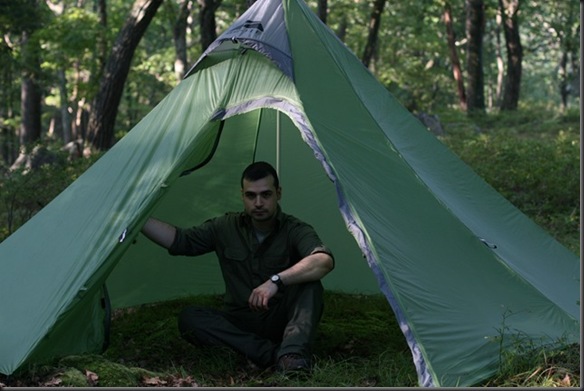 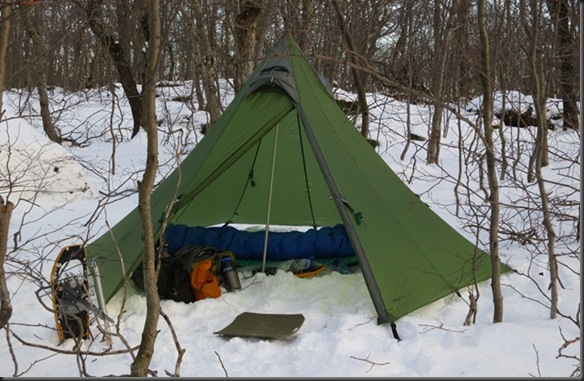 Now, that being said, the GoLite Shangri-La 3 is an amazing shelter. It has all of the great features that drew me to this design. It has an open floor so it can function much as a tarp. I can run a stove inside in bad weather, I can get it without taking off my shoes, I can carve inside, etc. It offers great wind protection, and because there is no floor, it deals very well with condensation. Even when you do get it, it just rolls down the walls and into the ground. I’m 6 foot tall, and the shelter is large enough (just) that I can sleep inside without touching the walls, which keep the condensation off my sleeping bag.

This is the best shelter design I have been able to find, and I am extremely happy with it. I use it for all seasons, and so far the shelter has stood up to anything I have been able to throw at it. I just wish GoLite would go back to selling just the flysheet. They could really bring the cost down making it very affordable.