I can not stop being amazed by how much interest there is in this topic and the drama surrounding Dual Survival. Since there is interest, I figured I would post some more details about the issue. For those of you not already knee deep in the drama, the brief summary is that Dave Canterbury started as a guy on YouTube, making videos about the outdoors, and the then emerging subject of bushcraft. He put out a lot of videos, and became popular. Eventually, he auditioned for Dual Survival on the Discovery Channel, and was hired as a counterpart to Cody Lundin. Soon after being hired, people started accusing him of lying, in particular about his military career. After season 2, he was fired by Discovery. Recently he released an apology, admitting that he exaggerated his military credentials. You can read about it here. 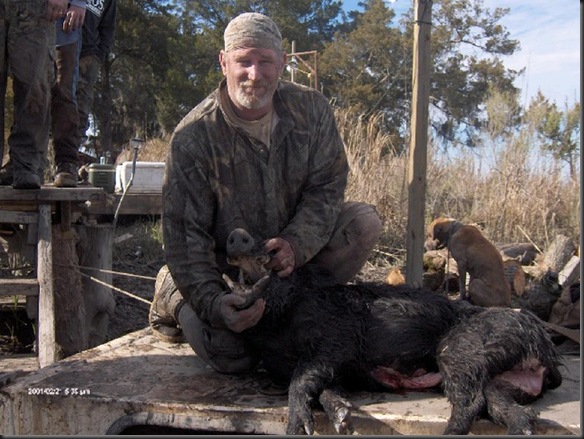 Unfortunately, his apology didn’t give much information, so people are continuing to ask questions and speculate as to what he actually lied about. I’ll try to point out some of the things here, to the best of my knowledge.

Now, I must admit, that there was a time when I was very involved with different bushcraft related forums. As such, I unfortunately have some first hand knowledge of the drama those places generate. Some of it involved Dave Canterbury, so I will recount what I know about it here.

The reality is that the apology and confession released recently by Dave Canterbury is old news to those who have been around for a number of years. Dave already had confessed, in much more detail, to his wrong doing years ago. Back when I was a member on Bushcraft USA, there was an altercation with Dave Canterbury that brought many of these issues to light. At the time, Dave Canterbury was a member at Bushcraft USA. He was confronted by several individuals about his military record. After some back and forth, he admitted to several things. The most significant, from what I remember was that he had claimed to be a ranger, which he was not. His explanation was that he had worked with rangers, so he felt like he was one of them. :/

I used to just link to that thread when people asked for info. I found that the thread shone a light on the character or lack thereof, of a number of the people involved. Unfortunately the thread has been removed, or at least can’t be accessed. I was however able to find the posted details of the claimed qualifications by Dave Canterbury, as compared to his actual record. This was compiled by a person on Bushcraft USA. While it’s no secret that there is no love lost between me and the moderators there, I have no reason to doubt the truthfulness of the research. Here is the relevant part of a screen shot I was able to save: 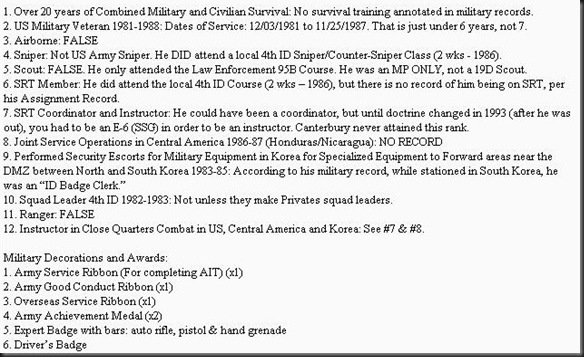 Each one of the points states the claimed qualification, followed by the actual qualification as confirmed by a search of Dave Canterbury’s military record. As you can see, some of the issues are more technical, and would be meaningful to people familiar with military ranks and specialty qualifications, while others are outright falsehoods.

I of course understand why people are upset about his lies, especially ones who have served in the armed forces. To be honest however, my interest in Dave Canterbury has always been strictly related to his outdoor videos. As such what type of military career he did or didn’t have changes my view of him as a person, but not as an instructor on outdoor activities.

That being said however, in recent days there has been a lot of hype about Dave Canterbury. Ever since his removal from Dual Survival, it seems that a legend has started to grow about him as a greatly skilled woodsman who lied about his military background. People seem to assume that he has been a survival expert and living in the woods for decades before starting his YouTube channel. Since this is the part of his career that I am actually interested in, I figured I would also mention what I have observed of Dave Canterbury in that respect in the time I have been around.

Maybe five or six years ago, Dave Canterbury started posting videos on YouTube. The early videos are now gone. I looked back on his channel, and the oldest videos he has up go back only about four years. In the early days, his videos were indistinguishable from those of any other person posting about buschraft, which back then was not as large of a pursuit as it is these days. His videos were very regular “here is my canteen cup”, and “look at my gear” (the Coleman backpacker special). He did not appear to spend any more time in the woods than any of the other guys posting, nor did he appear to have any special knowledge. In fact, the gear and approach he discussed were old news to any self respecting backpacker. If you want to see a fair representation of his skills in the earlier days (although still quite some time after he first started posting) have a look at his “Winter Camp IN THE SNOW” video, where he “makes it” through the night in conditions under which a regular backpacker wouldn’t even bother noting, yet he feels the need to capitalize. It appears that this was one of the first nights he had spent in the woods that wasn’t in summer.

He did appear to have knowledge as a hunter, particularly a bow hunter, but being that I am not one, it was hard for me to evaluate his skill level in that respect.

Now, that’s not to say that Dave Canterbury does not have skills, or that you shouldn’t learn from him. Since those early days, he has spent what he calls a lot of “time in the dirt”, and as a result has become very experienced at certain things. My point is that he did not just appear on the radar with years of experience under his belt.

Because it is very easy to track his learning progress and development, which I consider a good thing, one can note in which areas he has gained most of his experience. The reality is that if you want to learn skills about living in a stationary dwelling for an extended period of time, he is your man. His “Yurt” series was very interesting, and he has several more in that line. However, if you want to know how to move through the woods for extended distances with gear you can carry on your back, his experience and knowledge is just not there. Cody Lundin has made several remarks to that extent while on Dual Survival. If you look at his videos on clothing and “portable” gear, it will be obvious to anyone who has done any backpacking that he is not familiar with what such movement requires. There are some basics there that are simply missing, most likely as a result that this is not an outdoor activity which he practices.

So, Dave started out just like any other guy who grew up camping and hunting. Other than the fact that he had good and numerous videos, the early days did not show any particular skill or experience. By the early days I mean five to seven years ago. These were the days before sling bows, 10/20/30 piece kits, Pathfinder schools, three and a half “C”s of survivability, accounting principles for bushcraft, or any of that. Since that time he has picked up great skills in certain areas while remaining much less knowledgeable in others.

Please remember that I don’t write any of this to take away from what Dave does, or the education he promotes. I respect the fact that he continues to provide free information and education while so many others care about nothing but the bottom line. I still find his videos interesting, even though I disagree with him on many points. There are certain issues on which his channel is one of the first places I would check. However, I think we need to keep things in perspective. The last thing we need is another celebrity who will then go on to sell $120 belts.

Anyway, that has been the information I have encountered about Dave Canterbury in the time I have been around. I hope it helps those who have been curious.