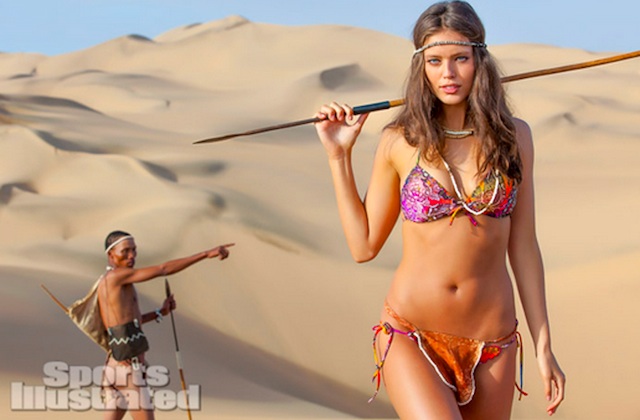 Aaah! The Sports Illustrated Swimsuit issue is a big deal to some red-blooded males who wait for its publication with impatience...or so I'm told.

Be it what it may, for its 2013 issue, the magazine photographed models on all 7 continents, and its photographers used locals to appear next to these gorgeous women. Using ethnic people with colorful and indigenous costumes as extras for fashion shoots background is a popular gimmick used by photographers.

I have mild but still conflicting views about this. There's the extreme view as expressed by Jezebel, a blog which describes itself as the home for "celebrity, sex and fashion for women", that clearly finds this very offensive....and there's another view on the opposite side of the scale that sees this as nothing more than an innocent (and practical) gimmick used by photographers to add realism to their off location shoots.

Frankly, I don't find it offensive provided the local individuals who, in essence, are co-models should be told of the purpose of their involvement in the shoots, should be paid a decent salary for their time and should treated with the same respect than the models themselves. Recognizing their worth as co-models rather than 'props' is my stance on this issue.

Naturally, a "decent" salary is an elastic term...does it mean a salary or fee based on local tariffs...or does it mean decent by Western standards? I don't know what movie producers pay for their local extras, but I would hope that the "ethnic props" ought to be paid very handsomely by their country's standards.

It's not the first time I write about this matter, and haven't changed my mind since this blog post, which involved Jezebel and Marie-Claire magazine.

So food for thought...do you think Jezebel's stance is too extreme...is too political correct? Is it really exploitation...bad taste...even racist? What would you do if you could decide what to pay?