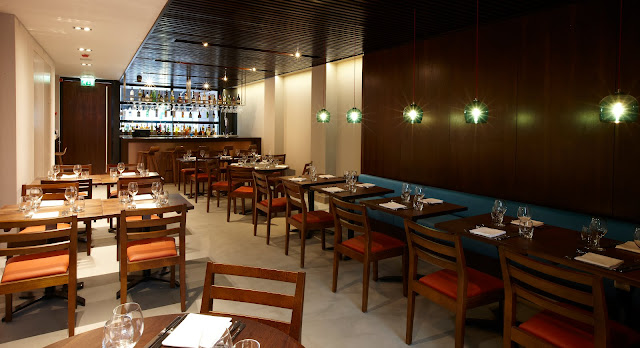 Sometimes there is nothing more thrilling than going out for Indian food. It’s the combination of spices, rich creamy sauces and quite frankly the chance to gorge on exotic homely food.
Cinnamon Soho delivered the goods! When you walk into the restaurant, the first thing that strikes you are the prominent low pendant green lights above the diners tables which are dramatically set against a stark dark mahogany wall.  It was a good indicator that the food I had heard so much about was going to be quite special, with quirky modern twists on traditional favourites.
We decided to start with a bottle of Alsace wine (£31) - perfect to cut through spicy foods with its soft buttery notes.

My dining companion Hannah and I were then directed to the Kingly Seekh Kebab wrapped in a naan bread as a large starter for £6.50. The ‘posh’ kebab as we christened it on arrival, was sensational (see pictured above).  It was filled with moist lamb, spices, cumin and ginger in a piping hot naan bread.
We also chose a couple of small starter plates to share - Burnt chilli chicken, Indo-Chinese style (£4.80) and Naanza – naan bread pizza with spiced paneer (£4.80 and pictured above). The portions were super generous and we had to muster up space for mains – Tandoori king prawns with a coconut malai sauce (£17). It was like eating fresh lobster with it’s funky melt in the mouth texture. For dessert, we had to have the sticky toffee pudding with ginger and garam masala – it was the size of a doorstop, and slightly more fragrant and lighter than the usual British type!
So Cinnamon Soho was every bit as exciting as we hoped. It was excellent value for such high quality nosh, making this a must stop destination in London town.

All images were provided for this review.

A huge thank you to Nicky and Emily @ Roche Communications and Jean-Luc at Cinnamon Soho.