NYT: Worshipping At The Kumbh Mela 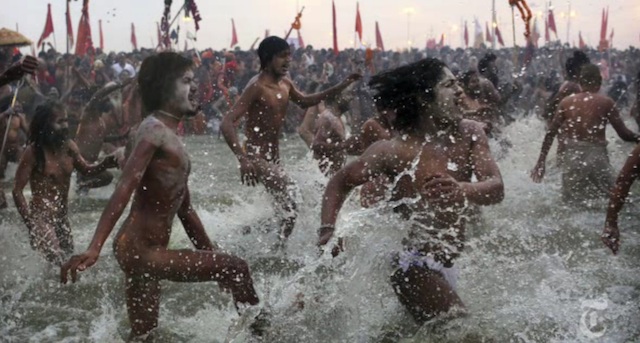 The New York Times is featuring a documentary movie on the Kumbh Mela, which is believed (and hyped) to be the largest religious gathering on earth. The Kumbh Mela is held every 12 years on the banks of the spot where the holy rivers Ganga, Yamuna and the mythical Saraswati meet.

The Kumbh Mela alternates between Nasik, Allahabad, Ujjain and Haridwar every three years. The one celebrated this year in Allahabad is the largest and holiest of them. It's erroneously reported and described by many media outlets as occurring every 144 years...this is false (even the BBC is mistaken). The Maha Kumbh Mela is the one that occurs every 144 years, and the last one was held in January 2001....so the Maha title definitely not this year's.

I attended the Maha Kumbh Mela in 2001 (I have a gallery on my website), and it was a mind-blowing experience which I describe as "rubbing shoulders with ascetic, sadhus, mendicants, mystics, charlatans, pilgrims, gurus and yogis".

I also read in The New York Times that unfortunately as many as 30 pilgrims were killed during a stampede at Allahabad train station. I recall the station well as I photographed some of the pilgrims arrivals and departures as well.