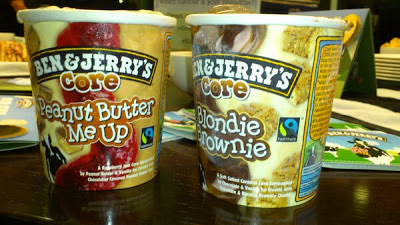 In a crowded ice cream market, the launch of a new ice cream flavour has to be exciting, interesting and crucially have the wow factor.

Last Tuesday night, I was invited along with a hip crowd of food blogger's to the sneak preview of Ben and Jerry’s latest flavours in Central London.
First up was the ‘Blondie and Brownie’ ice cream. It contains lush brownie pieces in vanilla and chocolate ice cream with a salted caramel core running through it. The sweet and salty pairing worked really well and was much better than I expected. Heaven really!
Second up was the ‘Peanut Butter Me Up’. Inspired by classic peanut butter and jelly (or jam!) sandwiches, it has a raspberry jam core running deep into the ice cream, surrounded by peanut butter ice cream and vanilla ice cream with peanut butter chunks contained in small chocolate cups. This was brought to the UK by pester power alone, coming straight from the States. Worth a try!

Putting the tasting aside, I did learn something quite extraordinary about animal welfare. All Ben and Jerry’s dairy comes from moo-saged (massaged) cows in the Netherlands where the animals even get to choose if they feel like a massage or not. In times when we are questioning where our food comes from, it’s an interesting story with a fun video here:
http://www.benjerry.co.uk/our-values/inside-the-tub/cow-cam

Thank you Anna for the invitation to 'eat ice cream'.
Posted by bella at 11:49 AM