Back Story I The Rajasthani Gypsy

Dinesh Khanna's statement (see my previous post) of "color is almost a language in India" reminded me of one of my favorite color photographs.

So I thought of featuring it here with its short back story. It was made in 2003 with a Canon 10D (remember those?) and is of a Rajasthani gypsy couple I had met at the Phulad train station, which is near the small town of Jojawar, located between Jodhpur and Udaipur. I recall they had been waiting for a train to Pushkar.

I made a number of sequential frames of this couple, who were quite pleased to pose for as long as I wanted. Another frame (not shown here) is of the man hugging his wife with a broad grin on his face...I actually sold a number of the two versions to various magazines and travel catalogs in the UK.

Would you agree that it's the color vibrancy of the photograph rather than the expressions of the Rajasthani couple that made it attractive to these magazines, especially with the blue background?

But let's also view it in monochrome ( using a quick conversion method).

Not as attractive as the color one, but still not bad. It being in monochrome perhaps focuses the viewer's attention to the couple's expressions...the squint of the man's eyes, and the women's awkward facial demeanor...and there's no blue background or pink turban to distract us....all we have left are the expressions and the man's regal allure.

So in this particular case, I think the color photograph trumps its monochrome version...but as we know, black & white can be (and is) frequently more compelling than color. During my The Cult of Durga Photo Expedition for example, the group produced Durga Puja stories in black & white, to exploit the grittiness of Kolkata's streets...and in such an environment, perhaps shooting it in color would have been a distraction.

But wait! What about some artsy processing of the photograph by converting it to a "wet-plate" or "tin type"? 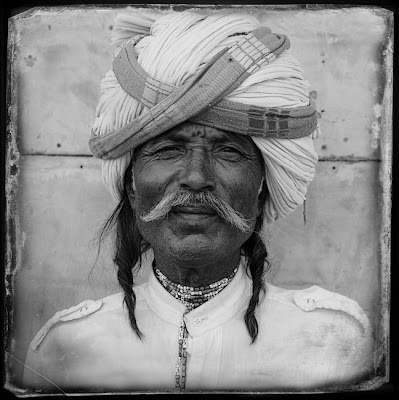 Does this artsy conversion trump the color version? I leave it to you to decide. As for me, I believe it certainly adds visual interest to what is a static portrait. It might qualify as "trickery"...but isn't photography itself a trickery of sorts?

I was very much against the concept of applying filters or manipulating photographs... even preferring not to crop or alter much at all from what I had captured in camera. But I've mellowed a little bit recently, and although 99% of my photographs will remain unaltered...there's room to do and enjoy stuff like the "wet plate" look.