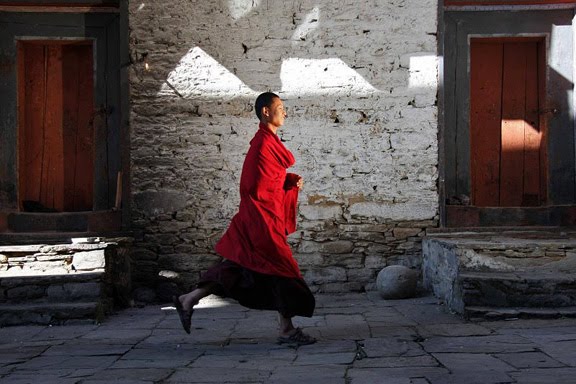 Photo © Nori Jemil -All Rights Reserved
Nori Jemil is a writer, photographer and a teacher who joined The Travel Photographer's Bhutan: Land of the Druk Yul Photo~Expedition™, and she has produced a broad body of work during the trip's two weeks' duration.

The above photograph of a novice was made at the Wangdicholing Palace, which had served as the principal summer residence of the first and second kings of Bhutan, but currently houses novices and monks. 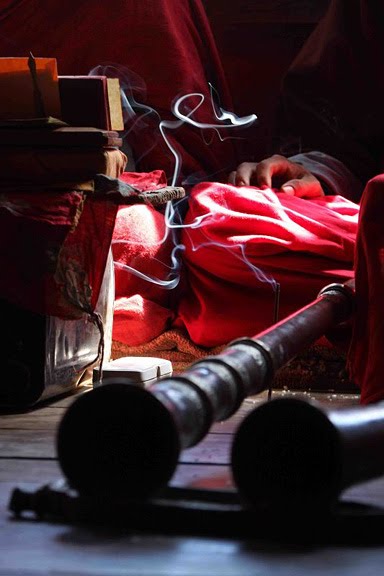 Photo © Nori Jemil -All Rights Reserved
This vertical photograph was made at the ancient Ura Goempa. The normally quiet temple was bustling with monks when we arrived, as a prominent judge had just died in the Ura area, and funerary rites were being held in its small ceremonial hall. The photograph captures the wisps of smoke rising from incense sticks, next to the head monks who were officiating the ceremony. 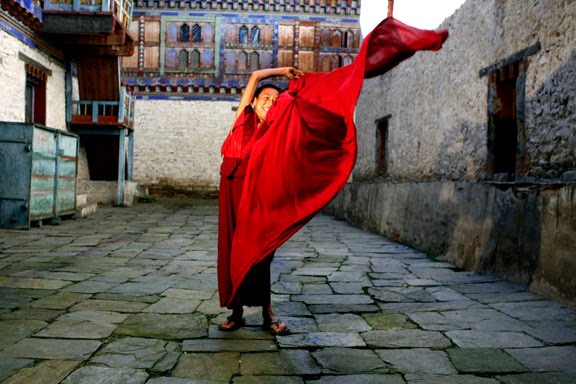 Photo © Nori Jemil-All Rights Reserved
The above photograph of a novice throwing his cape over his shoulders was also made at the Wangdicholing Palace and monastery.

As I mentioned in a previous post, Nori was commended for her entry in the Travel Photographer Of The Year's New Talent 2009 - A Traveller's Tale competition with a series of four narrative photographs on an island in Chilean Patagonia.

She was also the runner-up in the Landscape category of the 2008 Wanderlust Travel Photo of the Year competition with her photograph of the Cerro Torre and Monte Fitz Roy mountains in Patagonia.
Posted by bella at 3:06 AM