2009 Travel Photographer Of The Year* 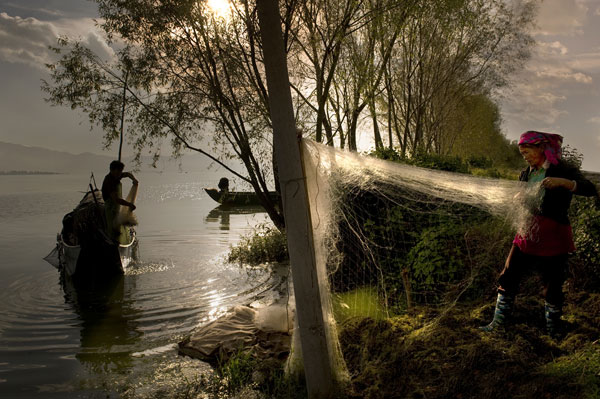 Photo © Johan Ensing via TPOTY -All Rights Reserved
The Travel Photographer Of The Year has announced the winners of its 2009 competition. Travel Photographer of the Year 2009 was awarded to G.M.B. Akash, an award-winning and well-known photographer from Bangladesh, who was unanimously voted as the outstanding entrant in the 2009 awards by the judging panel for his vibrant photographs.

There were many more awards and recognitions granted to other well known names such as Karoki Lewis, Larry Louie and Poras Chaudhary...most of whom have been featured on The Travel Photographer blog.

While Akash's quality and scope of work is impressive, I also very much liked the photograph submitted by Johan Ensing of the Netherlands of the fishermen cleaning their nets by Erhai Lake, in the Chinese province of Yunnan (above). His entry won Best Single Image in a Portfolio - People of the World.

I'm also pleased that Nori Jemil of the UK was commended for her entry in the New Talent 2009 - A Traveller's Tale competition with a series of four narrative photographs on an island in Chilean Patagonia.

Nori was one of the talented photographers on my Bhutan Land of the Druk Yul Photo~Expedition™ this past October.

TPOTY will be shortly making available Journey Three for sale, a portfolio book containing the winning and other highly placed images from the competition.