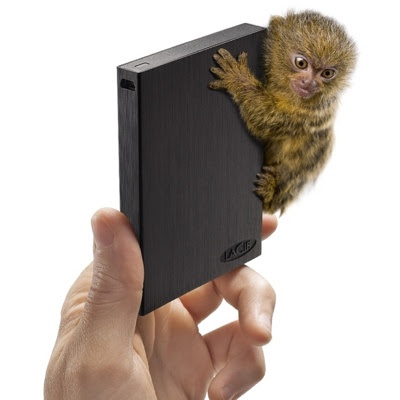 LaCie just announce the availability of one of the smallest mobile hard drives on the market, which was dubbed by the company as Rikiki. It appears that Rikiki means "tiny" in French. The august L'Académie Française would frown mightily at this claim as it's certainly not in the language of Voltaire, but slang.

Having cleared the linguistic mishap, LaCie Rikiki is available in 250GB, 500GB, and soon in 640GB capacities. The Rikiki is a user-friendly choice, regardless of whether you’re on a Mac or a PC. LaCie Backup Assistant is included to help manage backups. The price is priced between $75 and $150.

Despite the aesthetics of the Rikiki, I prefer the sleekness of the 500GB eGo Helium I bought some weeks ago...and my LaCie Rugged Hard Disk, but that's me.
Posted by bella at 3:02 AM