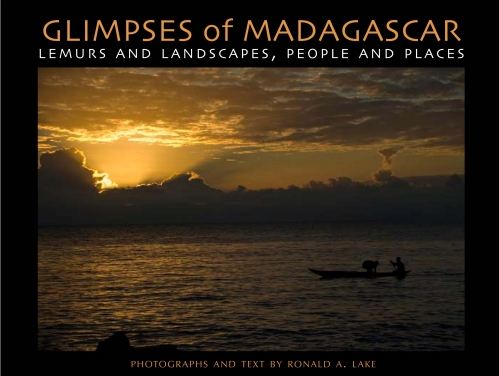 I was very glad to receive Ronald Lake's beautifully designed book titled "Glimpses of Madagascar" as I knew next to nothing of this intriguing island. All I knew was that it's an island nation in the Indian Ocean off the southeastern coast of Africa, and there was an entertaining animated movie with the same name (I exaggerate, but you get the drift...it's just not a country in the news).

I also visited Ronald Lake's website, where one can sample some of the pages of his Madagascar book, and order it directly, as well as view his other galleries.

It's also called the Red Island, The Eighth Continent, Eden on Earth, and a World Out of Time, and is like no other place on earth. One of the world’s poorest nations, it is one of the planet’s richest stores of biodiversity, which was the main reason behind Ronald Lake's decision to join a trip to Madagascar with the Wildlife Conservation Society.

In Ronald's own words:

"Madagascar is one of the poorest countries on earth. It also is one of the richest homes of biodiversity on the planet. The juxtaposition of these two facts is what makes Madagascar so beautiful, so tragic, so compelling and so promising. But very few people in modern consumer societies are aware of Madagascar's unique story - few even know where it is.

I enjoyed shooting pictures in Madagascar because the place and the people were so special. It certainly got the creative juices flowing. But I felt that just taking pictures wasn't good enough. I had to give some meaningful expression to what I saw. Thus the book, which is meant to convey more than images. For me, this is the purpose of photography, or at least the kind of photography that I am interested in pursuing."

An investment adviser in Greenwich, Connecticut with photography as his passion, it's immediately obvious from this book that Ronald Lake fell in love with the island of Madagascar.
Posted by bella at 3:58 AM