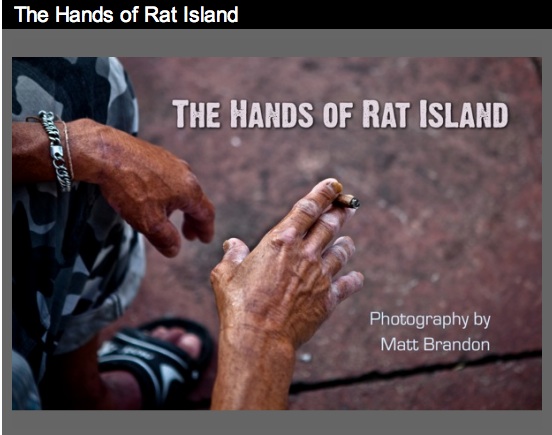 Matt Brandon has been photographing since he was 10 years old with his father’s Cannonet QL Rangefinder, and now specializes in NGO, relief and humanitarian projects. He recently moved to Malaysia, and frequently features audio slideshows on his The Digital Trekker blog.

Here's one of his latest production which he titled The Hands Of Rat Island. This self-assignment was completed over the course of 3 days, and was centered on a small market in Penang called Pulau Tikus or “Rat Island”. Matt decided he'd only feature the hands of the people in that market.

As interesting as hands (almost as faces) are from a visual standpoint, it's also interesting to hear the market hubbub captured by Matt's recorder. You'll also hear the inflections of Hokkien Chinese, one of the most common Chinese languages overseas, which is spoken by the Chinese-Malay.

Having traveled in Malaysia, I still recall the aromatic smells and exotic tastes of the wonderful Malaysian street food, which I've experienced in KL, Malacca and Penang...but I digress.

There are quite a number of posts on TTP on Matt Brandon, and these can be found here.
Posted by bella at 3:21 AM