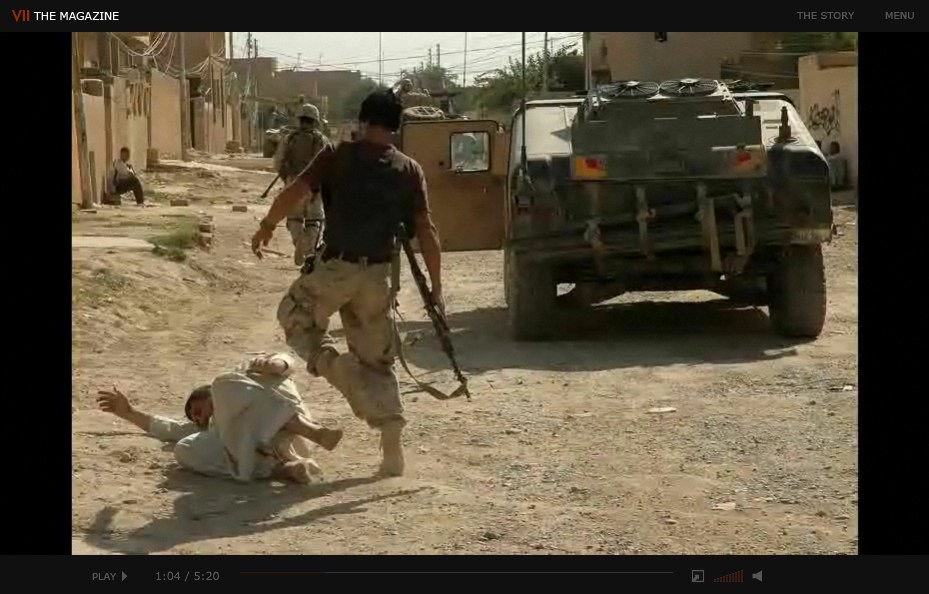 Photo © Ashley Gilbertson-All Rights Reserved
The announcement that the VII Photo Agency launched VII The Magazine has already been reported and blogged about for a few days already. The magazine is a syndicated online publication with photo stories and interviews with VII photographers.

The beta version of VII The Magazine is presented in the Herald Scotland newspaper, and in Lens Culture.

The first issue of the magazine features multimedia slideshows of projects by several VII photographers, as well as interviews with Jessica Dimmock and Ashley Gilbertson about their projects featured on the site.

I was particularly interested in Ashley Gilbertson's interview, and struck by one of his statements:

"If you show me one more picture of a soldier kicking in a door, I'm going to blow my head off."

I sense Ashley speaks for, not only war photographers, but for many of the sentient public who's been subjected to repetitive and unimaginative visual (and intellectual) presentations of the wars in Iraq and Afghanistan, and who's had (if they're anything like me) enough of the same stereotypical coverage which passes for cutting edge reporting in our media. I call it the stagnation of war photography...the same scenes over and over, perhaps from different angles...and with no back story. In fact, if I didn't read the captions beneath these images, I wouldn't be able to tell if it was in Iraq or in Afghanistan...or whether they'd been made yesterday or a year ago. Stagnation.

Ashley's powerful and poignant photo essay The Shrine Down The Hall, which shows some of the empty bedrooms of the over 5000 U.S. military personnel killed in the wars of Iraq and Afghanistan, rammed home the horrors of war much more effectively than seeing (and hearing) yet another photo essay by a gung-ho war photographer following US soldiers in an Afghani village, rounding up "Taliban" members (or whatever the caption writer decides they are), covering their heads with potato sacks while pointing guns at terrified women.

We need to see more work like Ashley Gilbertson's and much less of the kicking of Afghan or Iraqi doors....please.
Posted by bella at 2:17 AM