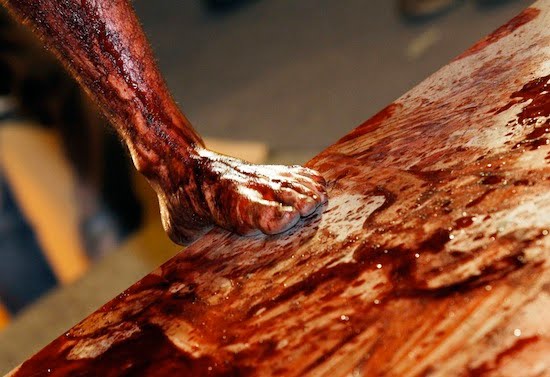 Many of the photographs show what Christian penitents do to commemorate the crucifixion, either by reenacting it or be causing bodily harm to themselves. It reminds me of the Muslim Shi'as self flagellation during the day of Ashura, in mourning of Hussein ibn Ali's death, which is equally gruesome.

In the above photograph, the caption reads:

"The blood-covered leg of a penitent, resting on a bloodied step during a procession through the streets in the town of Verbicaro, southern Italy on April 2, 2010. The penitents, called "battenti", or beaters, hit their legs with a "cardillo" (a cork with attached pieces of glass) and walk, bleeding, in groups of three through the streets, stopping in front of all the churches and chapels in the town. The tradition began in the thirteenth century and serves as penitence for Christ's death."

Penitence for Christ's death? The mind boggles.
Posted by bella at 4:17 AM