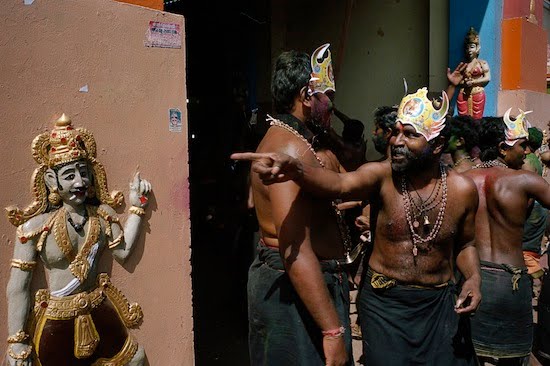 Photo © Asim Rafiqui-All Rights Reserved
It's always a pleasure to start off the month with a super interesting post.

Here's a religious event/festival that not only fires up my adrenaline and imagination, but whose descriptive details I savor with relish, particularly as these are written by one of my favorite writers, William Dalrymple, and photographed by one of my favorite photojournalists, Asim Rafiqui.

And naturally, this event (as one of the largest pilgrimage festival in southern India) will be added to my list of possible destinations for a photo~expedition in 2011 or beyond. Not as overhyped as the Kumbh melas, it's the sort of authentic event I would love to photograph and attend...and then produce photo-essays and audio slideshows. It is this kind of destination that I seek for my photo~expeditions, which are destination/event-driven rather than just hopscotching from one tourist spot to the other. The trek up to the temple takes a minimum of five hours on a crowded path and unfortunately, women aged 10-60 are excluded from the pilgrimage.

The festival is the Sabarimala pilgrimage, and it brings Hindus and Muslims together in a fashion that is seldom witnessed. It would be redundant for me to re-post what Dalrymple describes, so here is his article as published in The Guardian.

Here's Asim's post in his opus; The Idea of India, and in which he writes:

"Here, in this small town in Western Kerala, members of two communities have managed, through legend, lore and ritual, to create a shared spiritual and social space and bridged what many claim is an insurmountable divide. The Sabarimala pilgrimage, in the course of about forty days, will bring nearly 50 million pilgrims through this town, and to the Vavar mosque. The seventy kilometer trek from Erumeli to the mountain top shrine of the god Ayyappa at Sabarimala cannot be completed without first paying respects to his friend the Muslim pirate/saint Vavar and asking his permission to proceed."

Asim meets a guruswami who invites him to join his group to Sabarimala and, being of a different persuasion, assumes wrongly that the invitation was only rhetorical. As the guru leads his group towards the mountain shrine of Ayyappa, he waves and tells Asim that perhaps Ayyappan did not call him yet, but that when he was ready he'd ask him to come.

I hope Ayyapan includes me as well.
Posted by bella at 2:45 AM