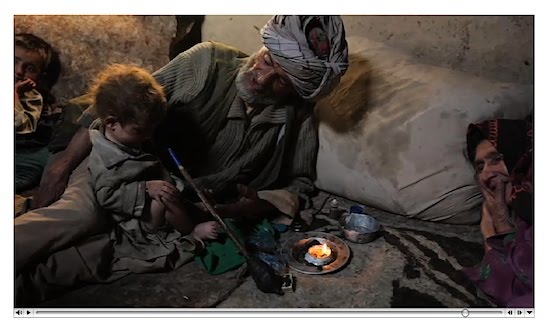 Photo © Julie Jacobson/AP-All Rights Reserved
It is estimated that Afghanistan supplies nearly all the world's opium, the raw ingredient used to make heroin, and while most of the deadly crop is exported, enough remains in it to feed a cycle of addiction among its population. It's also estimated there are at least 200,000 opium and heroin addicts in Afghanistan.

It's a fact of life that many rural areas in Afghanistan have no access to basic medicine such as aspirin, so whenever a villager needs a painkiller for a minor ailment, they are given opium instead.

Julie Jacobson is an Associated Press Writer and Photojournalist, who produced a video on opium addiction amongst a family in Afghanistan. In many of Afghanistan's remote mountain villages, opium addiction has infected toddlers to old men.

Julie has also written an interesting article published by Nieman Reports titled Crossing The Line: From Still To Video, which includes these four main guidelines:

"Some moments should be captured in photographs only. With those, be true to your photography and don’t worry about video."

"Remain as true to your photography while capturing video imagery. Make good “pictures” in your video".

"Some moments and events clearly call for video. But it isn’t possible to be everywhere and to get everything, so don’t try".

"When shooting stills and video, anticipate moments carefully. If they’re not there or time doesn’t permit, then make sure to be complete in shooting only one or both will suffer."

A worthwhile read to photographers and photojournalists facing this transition.
Posted by bella at 2:30 AM