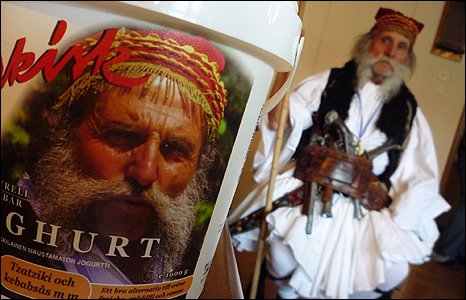 Photo Courtesy The BBC
The BBC reported that an elderly Greek discovered that his image was being used to sell Turkish yogurt in Sweden, and considered not only a personal affront, but a breach of his right to keep his image and likeness from being commercially exploited without permission or contractual compensation.

Minas Karatzoglou claims that his likeness was used without his permission by Lindahl's Dairy of Jonkoping in southern Sweden, and has commenced legal action against the company for compensation for the amount of $9 million.

On a prima facie basis, this appears to be a simple matter of some photographer not having the requisite model release...however there's more to that than meets the eye, because Karatzoglou is an ardent Greek nationalist who harbors deep-seated rancor against Turkey for its occupation of Greece. His grandfather and great grandfather took part in the War of Independence, which began in 1821, which ended centuries of Ottoman rule, and led to the formation of the modern Hellenic state.

In fact, Karatzoglou wears a panoply of 19th Century flintlock pistols and a curved dagger, which he claims have killed Turks.

The Swedish company claims that it bought the photograph of the mustachioed Karatzoglou from a Spanish photo agency, and that it has all the appropriate rights it needs to use this picture commercially.

I wouldn't like to be in the photographer's (or the head of the yogurt manufacturer's) shoes if he had to travel to Greece. These flintlock pistols seem to be in good working order.

I've posted my thoughts and recommendations on model releases in a 2008 post titled POV: Model Releases.
Posted by bella at 3:05 AM

Email ThisBlogThis!Share to TwitterShare to FacebookShare to Pinterest
Labels: Turkey