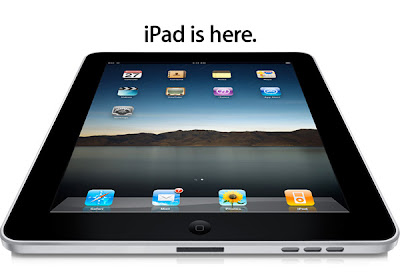 Okay, I've now seen it, touched it and toyed with it for a while at the Apple store. Yes, it's beautifully designed, sleek and really cool...and I'd love to win it in a free contest (or something like that).

However, I don't see its necessity for photographers as yet. Photoshelter's blog recently posed the question as to whether the Apple iPad will revolutionize the way photos are presented and consumed? Various "pundits" responded, and I tend to agree with the views expounded by Stella Kramer, such as this one:

"From discussions I have had and demos I have seen, there is very little that excites me about translating the telling of stories onto the iPad."

I've seen that the iPad shows off photographs incredibly well, and the scrolling of web pages is intuitive and it's light and well designed, and it's...well, cool.

But being cool doesn't translate into it being a necessity nor a tool. Yes, there are some commercial photographers who will use their iPad instead of high end leather-bound portfolio books to show clients, and wedding photographer will certainly upload their work on iPads to give to their high-end clients (and build its cost in their invoice), but the rest of us into the story-telling business? Not much. Perhaps if we had $500-800 to spare and wanted a sleek platform (although the Mac Book Pro 13" display is phenomenal) to show off our photographs...

Redesigning many photography websites from being both Flash-based and iPad-ready may be a boon to web designers and website providers, but photographers can ill afford this additional expense at this time.

The iPad comes in three "flavors": 16GB, 32GB, or 64GB flash drive, so it may be useful to commercial and wedding photographers to have by their side on photo shoots, but other than that, I'm still scratching my head at its usefulness. Perhaps in the very near future, there will be really "must-have" applications ("apps") that will convert it from being a toy to being a tool, and while I completely agree that it's a harbinger of the future of internet browsing and more, it's not yet on my list.

It's been reported by a think-tank that 50% of all computers sold for children by 2015 will have touchscreens...perhaps touch is indeed the future, but until the iPad grows up from being a toy to a tool for photographers, I'll be happy to drop by the Apple store and just play with it whenever I feel like it.
Posted by bella at 2:10 AM