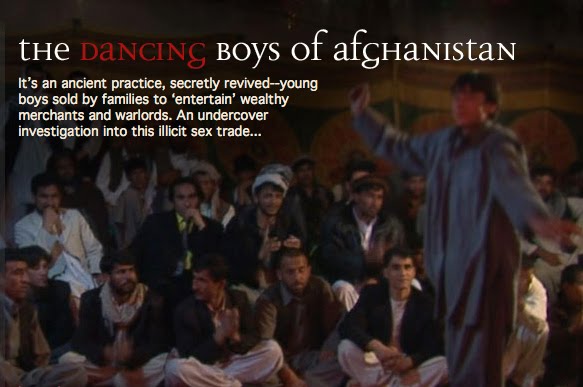 On Tuesday night, I watched the harrowing Frontline: The Dancing Boys of Afghanistan which exposed an ancient practice know as as "bacha bazi" which, literally translated, means 'boys' play'.

This illegal practice exploits orphans and street boys, and has been revived by powerful warlords, businessmen and military commanders in Afghanistan. These men dress the boys in women's clothes, who are trained to sing and dance for their enjoyment. The dancing boys are also used sexually by these men.

This is outstanding journalism by Afghan journalist Najibullah Quraishi, and my hat's off to PBS and to the Frontline producers for doing such an admirable job. I was particularly impressed by Quraishi and his producers' attempts to arrange the rescue of one of the dancing boys profiled in the film, an 11-year-old boy bought from an impoverished rural family.

In contrast with other productions (see my post of yesterday, for instance) the 11-year boy's face was blurred throughout the film to preserve his anonymity and self-respect.

Homosexuality is forbidden in Islam, and yet pederasty and boy concubinage has had a long history in the Persian cultural world which includes much of Afghanistan.
Posted by bella at 2:47 AM