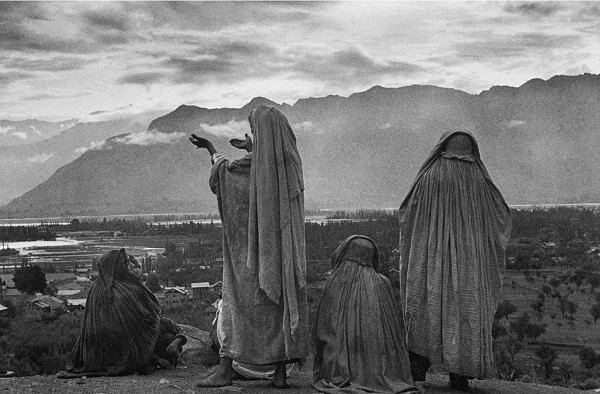 Henri Cartier-Bresson began traveling in 1930, at the age of twenty-two. For nearly half a century he was on the road most of the time, and the geographical range of his work is notoriously wide. Photographs of Asia (many of which are of China), North America, Japan, Africa, Europe, USSR, Middle East are shown arranged in themes, or chronology.

The New York Times has a review of the exhibition by Holland Cotter who, in the article titled A Photographer Whose Beat Was the World, writes this rather flowery sentence:

"The third and crucial constant in his career was, of course, a camera: in Cartier-Bresson’s case, a hand-held Leica, as neat and sleek as a pistol. Whether he was traveling as a journalistic eye for hire or sauntering through Paris of an afternoon, the camera went too."

I find it impossible to decide which is my favorite Henri Cartier-Bresson's photograph, but the one above of these Indian women in Srinagar (Kashmir) photographed in 1948 has always impressed me. Is it because none of their faces are visible, or is it because one of them appears as if she's holding a couple of clouds in her outstretched hands? It's described as Muslim women on the slopes of Hari Parbat hill as they pray while the sun rises behind the Himalayas, and was taken during a period of terrible violence in Srinagar. Magnificent.

Update: The New Yorker Magazine has an article/review on the retrospective at the MoMA.

From the article/review, I learned that the French title of HCB's best-known book, “The Decisive Moment, was “Images à la Sauvette”, which means “images on the fly". The French title implies something done somewhat furtively, and has much less gravitas than the English title.
Posted by bella at 2:11 AM