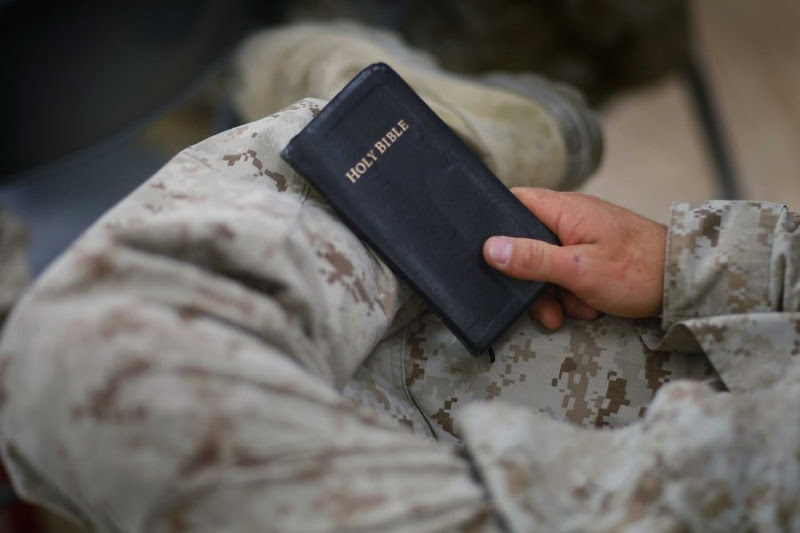 The Denver Post's Captured Photo Collection has featured a bunch of photographs led by the above image of a U.S. Marine of the 2nd Marine Exhibitionary Brigade, 2nd Battalion, 3rd Marines holding a bible during a Protestant church service on June 28, 2009 in Delaram, Afghanistan.

The rest of the photographs are of U.S. Marines in action.

I never quite understood (and never will) why similar photographs have appeared, and continue to appear, in the media. Is there a link between Christianity and our war machinery? Is it a conscious effort by myopic news editors to paint our wars as Crusades... sanctioned and even blessed by a Christian faith?? Is it to justify the inevitable loss of life, and give those who kill for our "freedoms" some sort of religious cover? Isn't that what religious extremists do? Haven't we had enough of this neo-conservative perfidious and hypocritical jingoistic claptrap of the past 8 years?

My antipathy at this rubbish dates back to the early days of this blog, when I wrote a short post titled Crusades.

But no one addresses it better than photojournalist Asim Rafiqui in his The Spinning Head blog, and I urge everyone to read his latest post on this and other issues.

He titled it Fighting Ghosts And Selling The Good War Or Why Are The Toy Soldiers On The Front Lines!, and it's his incisive opinion on the selling of war in our main newspapers. Here's a paragraph from Asim's blog post:

"The glory of war is being sold on the front pages of our newspapers, none of which have the courage to ask what they know is in fact a fake war, aimed at a poor and defenseless people, fueled by the ‘intelligence’ and advice of a group of venal, corrupt, blood thirsty and power hungry clique of Afghani warlords, drug barons and oil hucksters!"

And a thought-provoking quote from Chris Hedges, also from Asim's post:

"The vanquished know the essence of war—death. They grasp that war is necrophilia. They see that war is a state of almost pure sin with its goals of hatred and destruction. They know how war fosters alienation, leads inevitably to nihilism, and is a turning away from the sanctity and preservation of life."

Sanctity and preservation of life. These words meant nothing to the Crusaders. They're often bandied about, but still seem to be meaningless.
Posted by bella at 3:53 AM