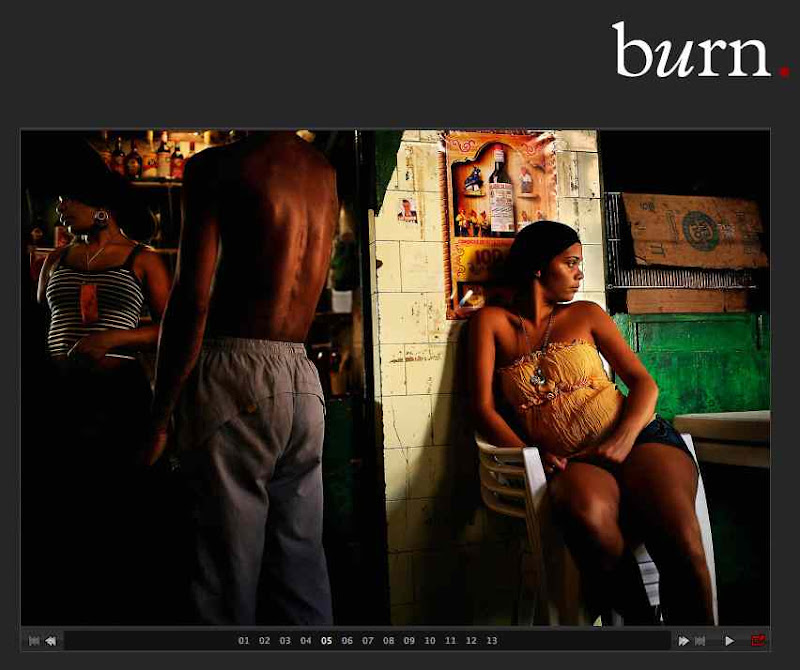 Photo © Andrew Sullivan/Courtesy Burn Magazine
Sometimes I stumble on a photograph that just stops me in my tracks. I can't really explain the reason, but all I know is that it has that effect on me...and Andrew Sullivan's sublime photograph made me stop. The caption reads that a delivery man called the waitress on the right "belleza pura", and he's right, but it's not only her that makes the photograph. All of its elements work...the positioning of the people, the shadows, the look, the colors...it all works just so perfectly.

Andrew Sullivan's photo essay Samba da Bahia is on the wonderful Burn magazine, which is amongst of the best photo websites I've seen in a while. Burn is curated by the legendary David Alan Harvey, one of the heroes of photography for his superlative work, and for his unstinting generosity in mentoring emerging photographers.

Andrew describes himself as a reformed newspaper photographer, but it's best to read his biography in his own words, as well as about his essay on the Samba da Bahia link above.

As a multimedia and samba aficionado, I must confess I literally ached to hear the sound that could have accompanied this photo essay. If only...but I can always look at them and play Jobim at the same time.
Posted by bella at 3:47 AM