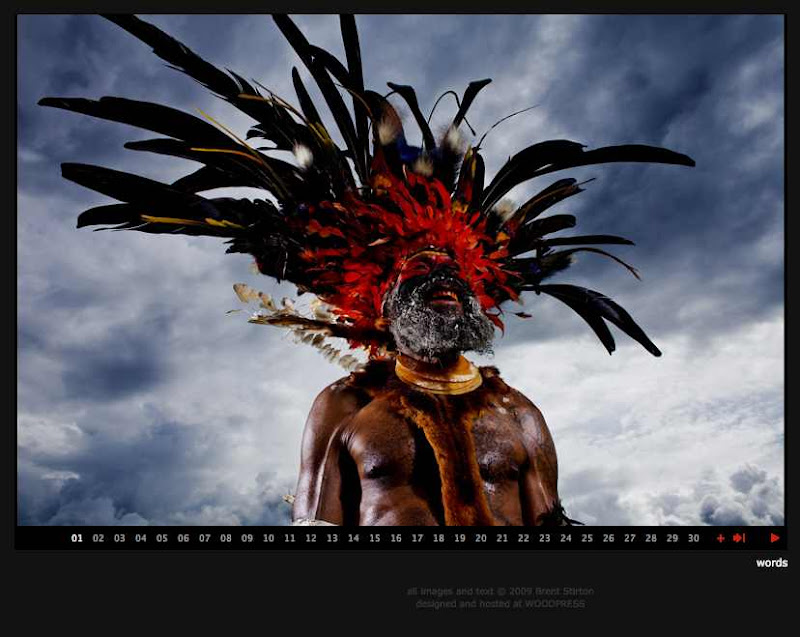 Photo © Brent Stirton-All Rights Reserved
Brent Stirton's work from Papua New Guinea is just superlative...have a close look at his series of images of PNG which highlights the uniqueness of its tribal culture and the ritual of dress and dance for which it is most famous.

Brient is the senior staff photographer for the assignment division of Getty Images, New York. He specializes in documentary work and is known for his alternative approaches, and travels an average of nine months of the year on assignment.

His work is published by: National Geographic Magazine, National Geographic Adventure, The New York Times Magazine, The London Sunday Times Magazine, Smithsonian Magazine, The Discovery Channel, Newsweek, Le Express, Le Monde 2, Figaro, Paris Match, GQ, Geo, Stern, CNN, and many other other will known international titles and news organizations. He also received numerous awards from the Overseas Press Club, the Frontline Club, the Deadline Club, Days Japan, multiple P.O.Y USA awards, and awards from the World Press Photo Foundation and the United Nations for his work on the environment and in the field of HIV. In 2009, he received awards from the National Press Photographers Association, and the ASME magazine publishers award for photojournalism for his work in the Democratic Republic of Congo as published in National Geographic magazine.

Brent's work in Ethiopia's Omo Valley was featured in TTP.
Posted by bella at 3:25 AM