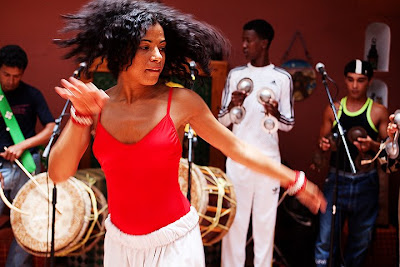 Photo © Tewfic El-Sawy -All Rights Reserved
One of the highlights of the Gnawa Festival was to be able to photograph three of the famed Afoxé Loni dance troupe during their rehearsal at the Lalla Riad in the medina of Essaouira. Afoxé Loni is considered to be one of the most beautiful and musically sophisticated Blocos of Berlin’s “Carnival of World Cultures”, and its history is closely tied to that of the carnival’s.

Amongst the three dancers was one of Afoxé Loni's founder, Murah Soares who is considered to be one of the greatest talents of Afro-Brazilian dance in Germany. Unfortunately, I didn't get the names of the remaining two phenomenal female dancers.

What I didn't know is that in Bahia, Afoxé processions are closely tied to the Candomblé religion; their purpose is to ritually purify the streets and calm down latent violence before the actual carnival parade. Here in Essaouira, the trio rehearsed with the virtuoso Gnawa Maalem Mahmoud Guinea, and produced a fusion of frenetic Brazilian and Gnawa music.
Posted by bella at 11:47 AM