My Work: A Gnawa Smile 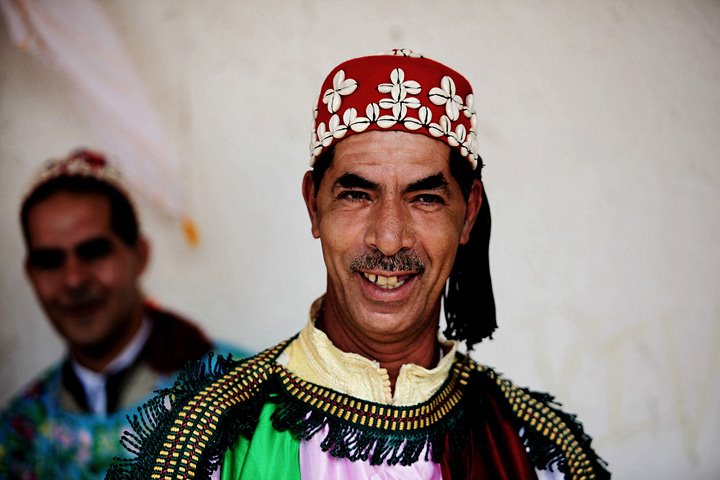 Photo © Tewfic El-Sawy -All Rights Reserved
One the highlights of the Gnawa Photo-Expedition was the procession of Gnawa troupes through the streets and alleys of Essaouira, which started at Bab Doukkala and ended at Mohammed El Qorry near Bab Marrakesh. The procession signaled the start of the 12th Festival of Gnawa Music.

The procession started off by a Gnawa carrying a tray of incense, and was followed by the troupes, possibly in a certain order of hierarchy. There was quite a presence of administrators and police, but I wasn't prevented from photographing as I wished. I suppose they took me for an accredited photojournalist.

The most prominent Gnawa troupes were the Houara de Taroudant, Ganga de Zagora, Ganga de Tamanar, and Gnaoua Agadir. Each of the troupes wore distinctive costumes, ranging from a flamingo pink to black, while others such as the Ganga de Zagora only wear the traditional white.

The Gnawa in the above photograph wears a multicolored tunic, probably based on a traditional belief that there are seven colors which represent 7 jinns (spirits) in Islamic numerology. Click on it for a larger version.

A multimedia feature including my photographs of various Gnawas and ambient recordings of their music and performances will shortly be posted on this blog.
Posted by bella at 4:09 AM