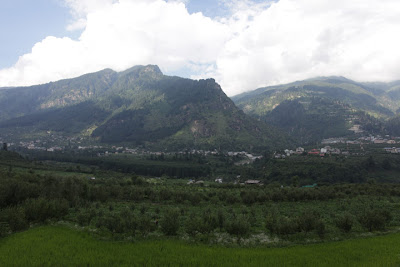 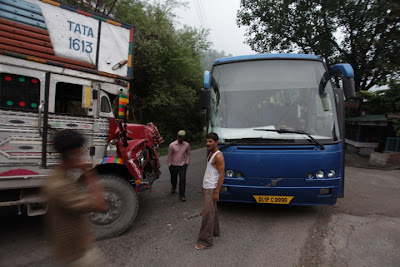 Well, after approximately 20 hours of driving from Delhi to Manali, we've reached our destination: the Foundry Photojournalism Workshp (Manali) which is to be held at the Green Cottages Hotel. The view above is from my room's balcony.

Manali is at an altitude of 6,398 ft in the Vyas River valley, and is an important hill station in the mountains of Himachal Pradesh, providing an idyllic scenery and temperate climate even in the months of July and August. I can actually hear the roar of the Vyas river from my balcony from where I'm typing this post.

As for the question as to why it took us 20 hours for a journey that normally should take about 12-13? Ah, well...perhaps the second photograph will explain it better than I can. Our bus had an unfortunate accident (rather minor) with a truck coming down an incline. No one was hurt on our bus, so we were extremely lucky. However, it meant that the bus' dashboard was somewhat bent out of shape making it difficult to steer. So we boarded 5 4x4s ordered by the Foundry team, and we were on our way. Having lost a lot of time, we were hoping to make it up, but the gods of the Kullu valley were not letting enter that easily. Flat tires and over-enthusiastic policemen conspired to impede our progress, but the team of instructors and administrators, tired and bedraggled perhaps, finally made it.
Posted by bella at 4:57 AM