As you guys know, I usually don’t bother with doing trip reports for day trips, or other minor outings, but I figured I would share this one with you because it involves some of my gear that you guys have not seen before.

This past year I have been trying to expand my range of outdoor skills, so I can travel over more challenging terrain and be able to reach locations that otherwise would not be accessible to me. For me at least, that is a big part of woodsmanship. Feeling at home in the woods involves being able to travel through it and get to the resources you need over varieties of terrain and under different conditions. You have probably noticed that I have been working on my navigational skills, sometimes not very successfully. It has been with this theory in mind.

Over the past few years now, I have been working on what is very generally called mountaineering. Some of the skills involved include the proper use of different types of crampons, and ice axes, securing anchors, belaying, etc. Well, this Christmas, my girlfriend got me ice climbing lessons. By ice climbing I don’t just mean walking or ascending on ice, but rather the ability to climb vertically on ice. While I have a decent amount of experience (good or bad) traveling on moderately inclined ice, I had never done any actual ice climbing. So this past weekend I got together with two other guys, Dan and Jesse for the class. The course is run by Eastern Mountain Sports (EMS), which is actually the place where I buy all my mountaineering gear in my area. Eric (the guy in the white helmet was the instructor). He did an amazing job.

The meeting location was an equipment store for EMS near the Catskills. We got there early in the morning. The great thing about the course is that all the equipment is supplied if you need it. I already had mountaineering boots, crampons, and a general mountaineering (B rated) ice axe. The things I needed, and were provided to me were the harness, helmet, and ice tools (ice axes designed for technical ice climbing). After everyone got their gear, we went to the Kaaterskill region of the Catskills (coincidentally where I was for my last trip report), and started going up the mountain. 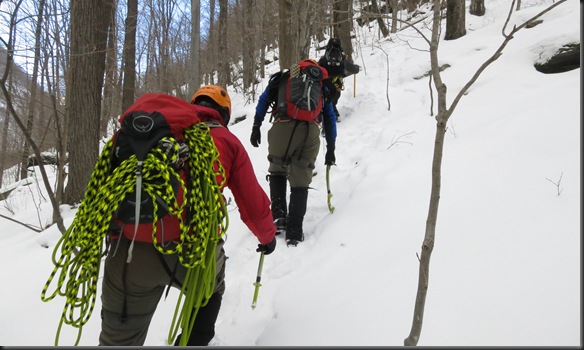 The instructor and I were wearing single mountaineering boots. I have the Scarpa Mont Blank GTX, which if you are interested in this type of stuff, are almost identical to the La Sportiva Nepal Evo GTX, but are about $100 cheaper. The other guys were using double plastic boots (an inner insulated boot covered by a plastic shell for rigidity and water protection). Understandably, some adjustments were required along the way in the hopes of achieving comfort. 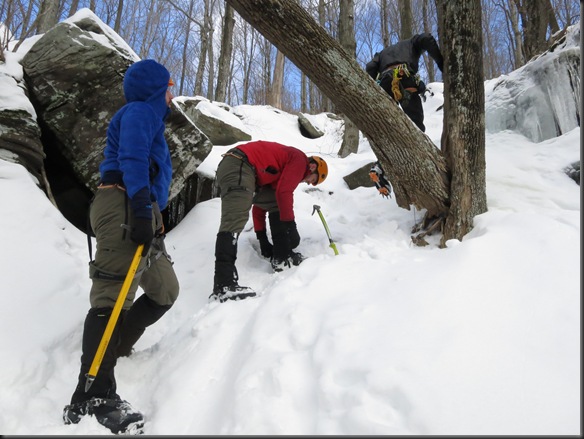 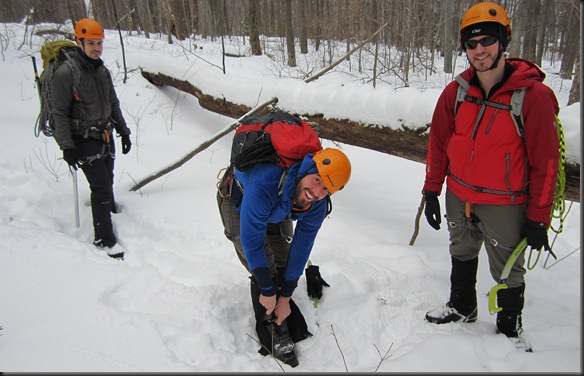 Even so, getting to the ice wall was not particularly difficult. 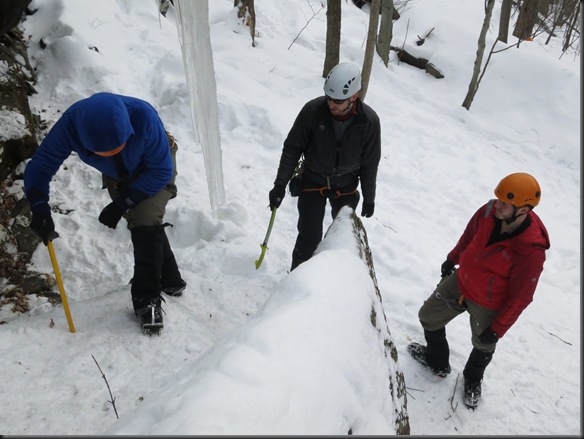 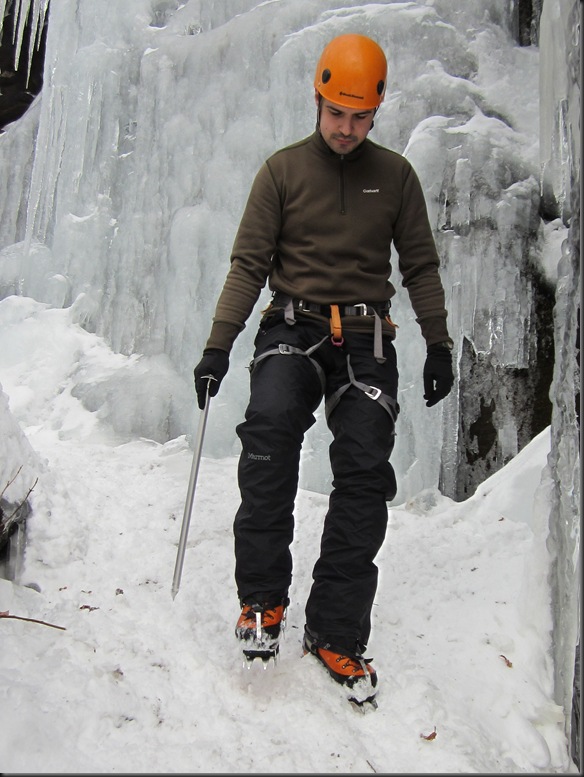 It was about noon when we reached the location where we were going to start climbing. There was already another team there setting up. We stopped to eat lunch. 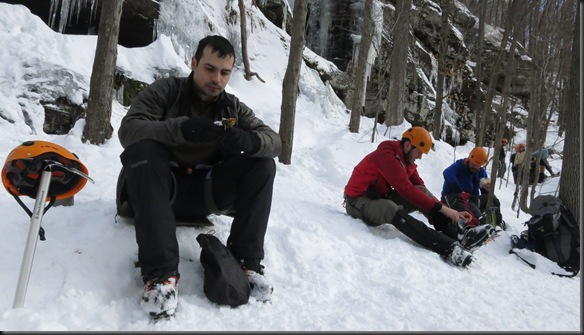 The ice axe you see under my helmet is my general mountaineering axe that I was talking about earlier. It is a Black Diamond Raven Pro. They come in different lengths. I have custom cut the shaft of this one to about 62 cm (ice axe lengths are measured in centimeters). For those of you not familiar, a general mountaineering axe typically has a straight shaft and is used over moderate terrain for support in the snow, cutting out steps in the ice or for self arrest if you fall. Such axes usually have a B rating. Technical axes on the other hand have a T rating (the shaft and head are rated separately), and are designed for more extreme angle ice climbing. In the pictures below you will see me using two of them to climb.

It is hard to see from the picture, but I was using my Black Diamond Sabretooth Crampons Pro. They are the ones I own, and are designed as a technical mountaineering crampon. They are not technical ice climbing crampons, but I wanted to use them here because I like them. They worked out just fine. The other guys were using the Black Diamond Cyborg Crampons. 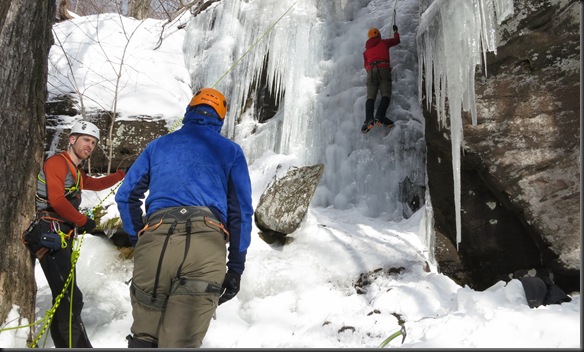 The day was very warm. It was about 26F (-3C). We started out with some easy ice, although, since I had never done it before, was the hardest part of the climbing for me. Here I am going up: 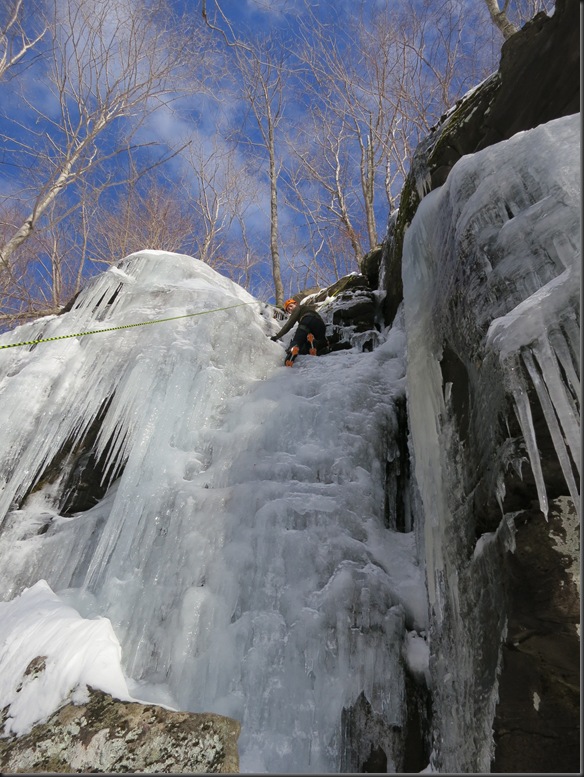 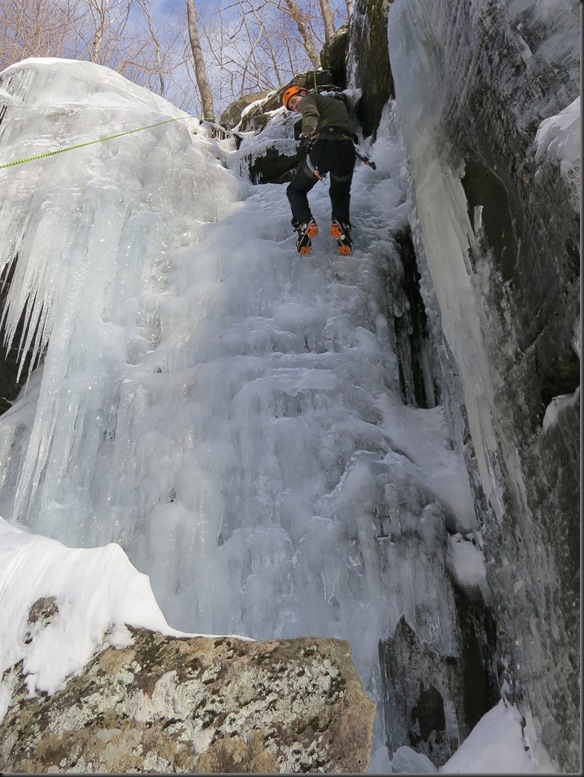 From there we moved to a harder location. By that time the temperature had suddenly dropped, so we had to add more layers. The ice was also wet in this location so I put on the hardshell top. 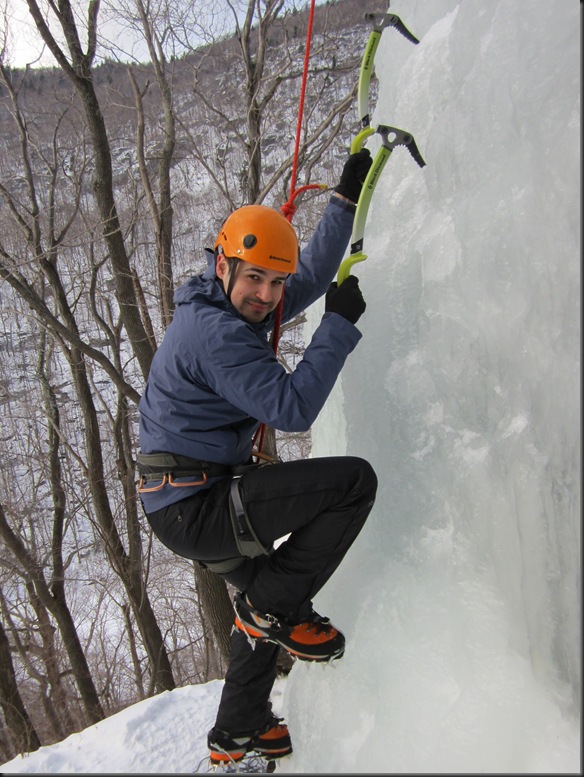 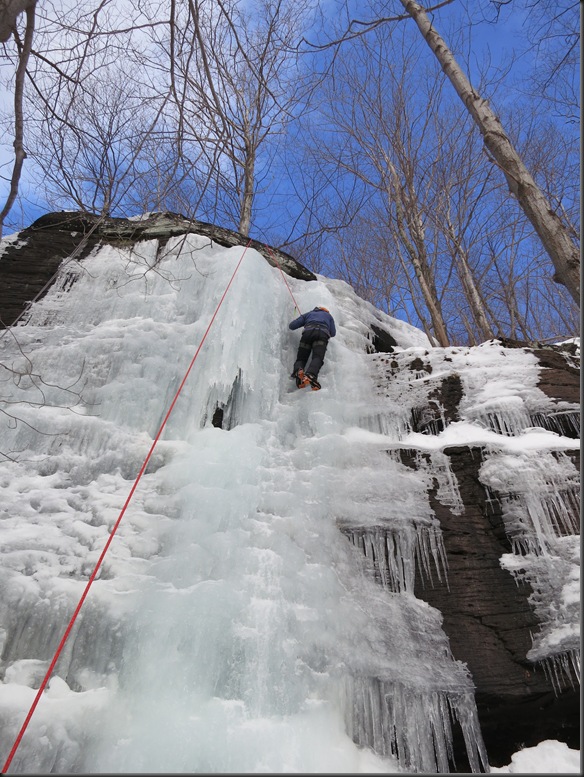 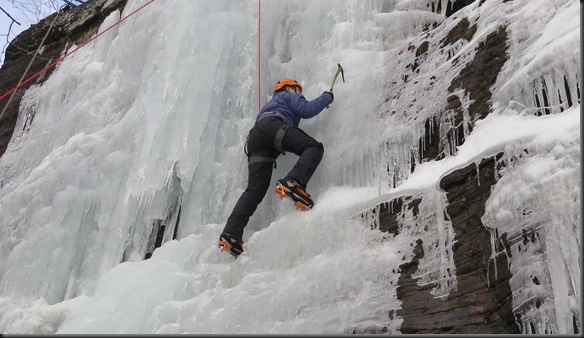 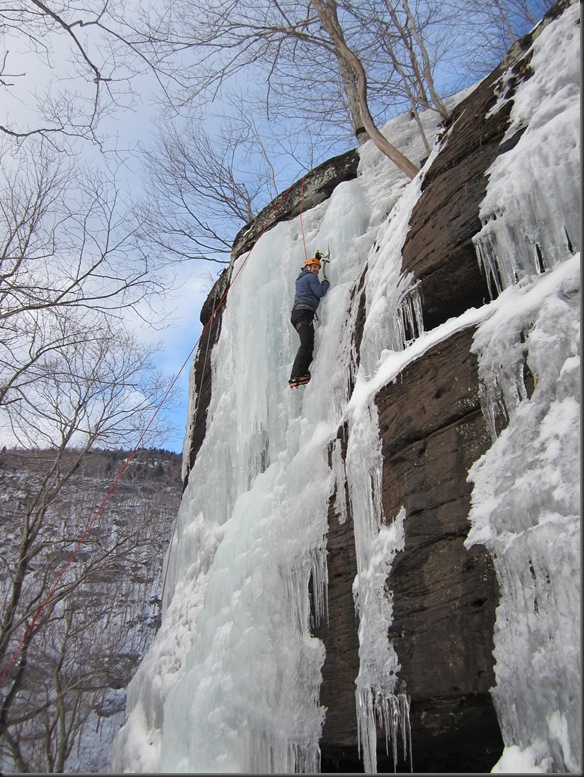 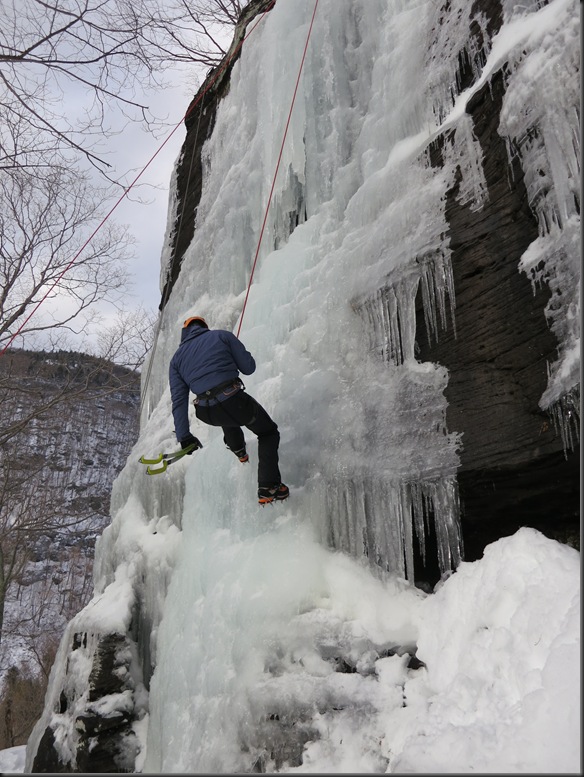 When I was on belay, I had to put on my Patagonia DAS parka. I was fine without it earlier in the day, but I was glad I had it in the later parts of the day. Its hood fits easily over a helmet, which makes a big difference. 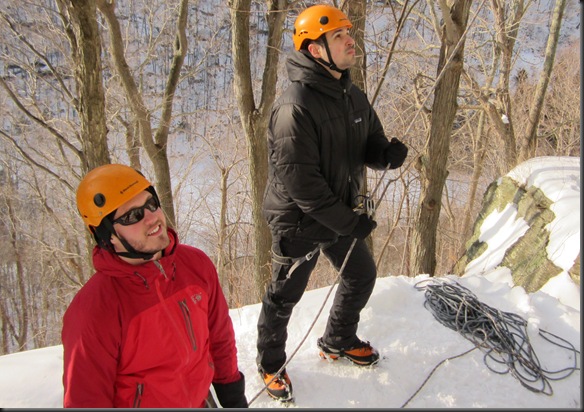 Around 4:30 pm we took down the ropes, packed up and headed out. 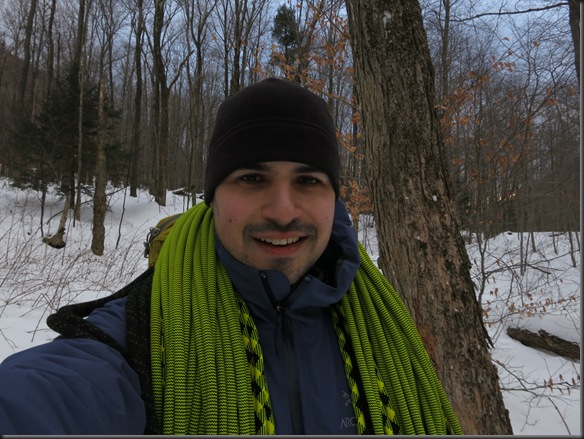 Overall, a great day. The class was very useful, and in a very short amount of time, I was able to climb up grade 2 ice. I have no interest in sport climbing or becoming an ice climber, but it is a great tool to have in the bag, expanding the range of where I can go and what I can do when in the woods. I learned a lot that I can apply to my more general mountaineering. I also lucked out with having awesome guys in the class. Both Dan and Jesse were great to hang out with and as climbing partners, and Eric was an excellent instructor.

I was also very happy with my gear. When I bought the Scarpa Mont Blank boots, I never had ice climbing in mind. I got them as replacements for my plastic double boots because the double boots were just too uncomfortable for any significant travel. The Mont Blanks were very comfortable (for boots with a full shank) during the approach, which I knew from my prior trips, but they also performed extremely well when climbing. Similarly, my crampons, which I got for more general travel over ice, performed very well when I was climbing.