“Stupid Simple” – Simplification of Gear as Means of Complicating the Outdoors

Before I get to the substance of the post, let me say that this is in no way intended to offend anyone or to designate any person as stupid. The title of the post is derived from a post written by another blogger, Andrew Skurka, titled “Stupid Light”. As a very general summary, the author, who is often referred to as an ultralight backpacker, at least by others, was expressing that there is a point where the preoccupation with lightening one’s gear can lead into gear selection that actually makes the trip more difficult, or even impossible, thereby negating the purpose of lightening one’s load to begin with. 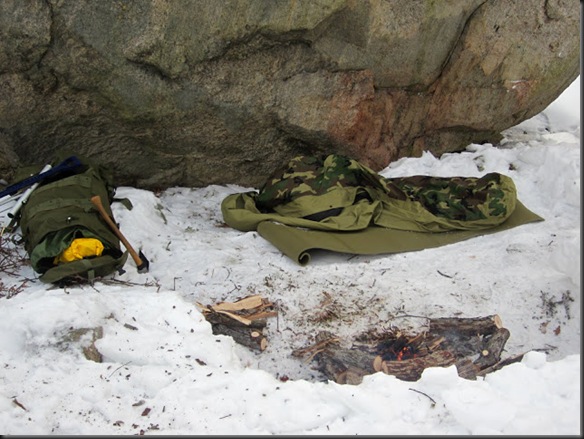 Above picture: going “stupid simple” by not bringing a shelter. The wind was so strong that I had to gather a lot of firewood to offset the wind chill factor. I brought an axe that weighs almost as much as my shelter for that purpose. Stupid simple!

I would venture to guess that most of my readers are not preoccupied with cutting weight, especially if they find interest in traditional skills and bushcraft as I do. However, there is a similar concept in out circles that revolves around “simplification”, and “going back to basics”. With a zealous fervor we pursue minimizing our kit and the items we bring, much like the ultralight backpacking community obsesses over weight.

I certainly understand the desire, and benefit of reducing gear, just like I understand the desire to lower the weight of one’s gear. Having less items makes the ones you bring easier to use, makes you less reliant on gear, and teaches you how to efficiently use the resources around you. However, just like one can go “stupid light”, I believe one can go “stupid simple”. There comes a point where simplification loses its effectiveness, and in fact starts to counter the benefits it originally brought when we first started the simplification process.

To add to the dilemma, “traditional” gear and “multiuse” items also start to play a role in this “simplification” process. Often it is assumed that going back to the gear of our ancestors will simplify our kit and make our experience in the woods more basic. Similarly, there is the assumption that replacing two items with a single multiuse item is always a good idea, and simplifies one’s kit.

I think both of the assumptions are inaccurate, and if taken to extremes, can “simplify” our gear to a degree where it makes things more complicated. I have to admit, this type of stuff makes a lot more sense to me in my head than it does when I try to explain it, so let me try to do it through an example.

Let’s say that you are tired of carrying around a bulky sleeping bag. The solution? Bring a wool blanket. That way, you can leave home the sleeping bag as well as your coat, because the blanket can also be used as a coat when you wrap it around you. You have now removed two items from you kit, and replaced them with a single multiuse item. To top it off, it is a traditional item. Long live bushcraft! Right?

Well, not exactly. An item that theoretically has multiple uses is useless if you never actually use it or if it doesn't perform the jobs well. Let’s assume for this example that the blanket you are using is thick enough so that it offers the same amount of insulation/temperature rating as the sleeping bag. The odds are pretty good that this one blanket is actually heavier and bulkier that the down sleeping bag, down jacket, and hardshell jacket (because after all you now can’t use it over a wool blanket) that you just left at home. On top of that, as is the nature of multiuse items, it does not perform either function particularly well. Even if it keeps you warm at night, wrapping yourself in a blanket is a far cry from having a good jacket with you. Simple? Yes. “Stupid simple”? Looks like it. Replacing three one pound items with one five pound item that doesn’t perform any of the three jobs all that well, is one of those forms of “simplification” that actually makes things more complicated.

I know, the problem is that it is not simple enough! You decide to bring neither a blanket nor sleeping bag. You will just bring knowledge, which doesn’t weigh anything… and a full size axe. The forests will fall before your mighty swing, and the long fires will burn through the night and keep you toasty warm. Simplification! Tradition! Multiuse! Bushcraft!

Well, not exactly. The axe you brought has a 3.5lb head and a 1.5 lb handle, for a grand total of 5lb. For that weight you could have brought a 3lb sleeping bag (rated to 0F), a 1lb tarp, a 0.5lb stove, and a knife. Additionally, by “simplifying” you now have to spend several hours each day collecting fire wood. The simplicity that was supposed to free us when in the woods has now chained us down and is preventing us from traveling, looking for resources, or simply enjoying ourselves. Every hour you spend chopping wood for the night is an hour of fishing that has to be sacrificed, or two miles that have to fall short in your travels. Simple? You bet! “Stupid simple”? I think so!

Look, I think simplifying our gear is a great thing. Too often we see people in the woods relying all too much on huge amounts of gear. In effect they have brought their house out with them in the woods. I thin that misses the point, makes things potentially dangerous, and keeps one from truly enjoying the outdoors. However, when we take it to an extreme, we reach a point of “stupid simple”. This is exactly the same way that reducing the weight of your pack is a great idea. However, that process can easily lead to a place of “stupid light”.

Like Andrew Skurka put it: Not carrying what I need = “stupid light”. I would venture to say that a similar measuring stick can be applied to our urge to simplify.