So… this is going to be another rant. If they annoy you, please ignore it. If you decide to stick around, I’ll gripe about how most of the information we see today on survival is designed for situations that only exist on TV and books. 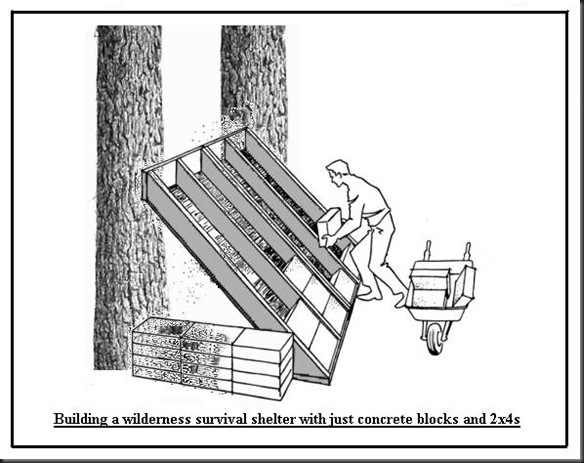 I’m sure I’m not the only one who has noticed this phenomenon. You open a blog, and you see a post about “How to build an emergency survival shelter”. Sounds like a great skill to have, so you keep reading. “All you’ll need for the shelter is an axe, a buck saw, 50 feet of rope, and four to six hours”. What?! In what contrived, staged survival scenario did you just find yourself, where you are stranded in the woods without your gear, but you have an axe, saw and 50 feet of rope, let alone the luxury of four to six hours? First, if we look at this realistically, why are you in the woods without proper gear? Second, why are you in the woods without proper gear, but are for some bizarre reason carrying several pounds of cutting tools and rope? Third, if the answer to the above two questions is that you lost your gear in the woods, then what miracle of nature allowed you to lose all your other gear, but let you keep the exact tools you will need for the shelter?

And let me be clear that I am not trying to pick on bloggers. After all I am one. Of course we do things that are sometimes wrong with the knowledge and resources we have. Here I am talking about respected bushcraft and survival experts and instructors.

Last night I was re-watching an episode of Ray Mears’ Extreme Survival; the one on Arctic Survival. When I first watched it about fifteen years ago, I thought it was brilliant. In many ways it still is. Something struck me as odd however. The episode starts with him showing us how to survive a night in a northern forest. He gets off his snowmobile (presumably a survival situation where his snowmobile broke down), and starts making shelter and fire. He takes out an axe, a knife, a snow shovel, an old sleeping bag, a cup, a fire steel, and then proceeds to make a shelter that will let him survive the night. Which aspect of this survival scenario is realistic, and which of the skills that are then demonstrated is in any way practical for a real survival situation? The same questions as above apply here. How did you end up in a survival situation deep in the woods with an “old” sleeping bag rather than your properly rated sleeping bag, which would let you spend the night out without relying on a fire? How did you end up without shelter, stove, proper sleeping gear, but at the same time end up with an axe, knife, snow shovel, etc?

Similarly, in the episode on survival in the Rocky Mountains, he proceeds to build an emergency lean-to together with a long fire. All he needed was an axe and his knife… and matches to start the fire. Under what conditions did you go hiking in the woods without proper gear, but with a 3/4 axe? What happened to the contents of the backpack to which this axe is strapped? Which part of building an “emergency survival shelter” with an axe is useful to someone who is in a realistic survival situation? Presumably in a real survival situation the person has lost their whole pack, not just the select pieces that would require them to build a shelter, but not the ones needed for its construction. Also presumably a person in a real survival situation did not stage it as such, so there is no reason why they would be in the middle of the forest with just an axe.

Let’s move on to another well known survival and bushcraft instructor, Mors Kochanski. Recently he has started to release videos on YouTube. One of them, which I linked to here in a prior post, was on building a survival kit. While his recommendations were all very good, he ended up with a survival kit that weighs several pounds and required a backpack to carry. Nothing wrong with it in and of itself, but under what imaginary conditions are you in any way likely to end up without your regular (presumably sufficient for the climate) gear, but you will still have this huge survival kit? Since the kit is so large, the only logical, or even possible place to carry it is your backpack. If you have lost your gear, presumably you have done it by losing your pack. In that case the survival kit is gone as well.

Similarly, in his videos on selection of survival axes, he recommends an axe that has a 27 inch handle and weighs 3.5 lb. Other than in a class or on YouTube, how can you realistically end up in a survival situation where you have no gear, but as if to shoot an instructional video, a 3.5 lb axe appears to save the day? After all, he himself states that whenever his canoe flips over, the axe is usually the piece of gear that gets lost first.

And in case I have not torn down all of your heroes, have you seen the required items for the Dave Canterbury’s Wilderness Outfitters Survival Course? Let’s start with the bag of steel wool. Looks like you will learn to light survival fires with steel wool and batteries. After all, I know that when I find myself stranded in the woods and have lost my lighter and matches, I always have a bag of steel wool and a pack of nine volt batteries handy. I’m being sarcastic of course. How would you possible end up in the woods with steel wool and batteries, but not proper fire lighting equipment? It’s absurd, and only occurs in staged survival situations where party tricks like these are presented for entertainment. The next required item… a queen or two twin size wool blankets. They will actually teach you how to survive with two wool blankets. Again, how is it possible that you would end up in the woods without proper shelter and sleep gear, but carrying two wool blankets?! What, did you get your packs confused and brought your backpack full of blankets instead of the one with you backpacking gear? It’s right down absurd and 100% unrealistic.

The wool blanket survival issue is not unique to Dave Canterbury either. Similar examples can be seen all over. How about posts about surviving a night in the woods with just a blanket? If you are carrying 3 lb worth of blanket into the woods, why on Earth are you not carrying a 3lb sleeping bag so that it wouldn’t be a survival situation to begin with? Why would you have a blanket with you but not a sleeping bag, or for that matter, your regular gear? This is a contrived survival situation that has been created on purpose. There is nothing wrong with testing yourself if you so wish, but this does not translate into a genuine survival situation, nor are the skills subsequently demonstrated directly relevant to a real survival scenario.

All of the above examples present situations where interesting survival skills and gear can be presented, but it bothers me that none of them have any connection to the reality of a likely survival scenario. They are created for television or books, and allow us to daydream about surviving in the woods when we are stranded there with no gear except for an axe, a knife, etc.

I’ve noticed similar things with my own gear selection. For a long time I carried tools for making cups and water storage devices, just in case I lost my pot, bottle, and cup. Where did I keep the carving tool? You guessed it, in my pack with my pot, cup and bottle. Eventually it struck me that if I somehow lost all that gear, the tool I kept for that survival situation would be lost as well. Now, I could go in the woods with just that carving tool and shoot a video on how to make a “survival” container, but I would not be showing you anything related to real survival because in a real survival situation I would have lost that tool along with the rest of my gear.

The only practical aspect of the survival skills and gear that I have been discussing above are to demonstrate how to use good woods skills to make up for the fact that you are a horrible woodsman. After all, one of the most important things about being a good woodsman is knowing the proper gear to bring for the weather and conditions you are likely to encounter. If you find yourself stranded in the woods with just an axe and 50 feet of rope, you have made some horrible decisions that should be revisited and corrected way before you have to start worrying about how to build a shelter with an axe. The first step to correcting those errors is to stop watching survival tutorials so you don’t get the idea of going in the woods with an axe and a bag of steel wool, instead of proper gear.

Don’t get me wrong, I have nothing against staged survival scenarios as a teaching tool. What bothers me is that so much of those staged survival scenarios are not staged to show any realistic survival or skills. They are staged to make the host or writer look good and make the activity look exciting and fun, but as a result, they deviate significantly from the skills needed in a real survival situation or the tools you may be likely to have. Of course, there are others like Les Stroud who strive for realism. However the reality of his survival is not nearly as dramatic, spectacular or inspirational.