This past weekend some of the New York members of Blades and Bushcraft had out third bushcraft gathering. We are counting the Van Wyck airplane crash site trip as our second meeting.

For this one we decided to keep it simple. We would stay on trail the whole time, and pick a route that was not too exhausting, but at the same time would keep us active for a good part of the day since the temperatures were not particularly high. There were five of us: Beanbag, Son O’ Beanbag, Mibuwulf, Wood Trekker (Me) and our newest member, Terahz. Brother O’ Mibuwulf was supposed to be with us as well, but at the last moment he had to drive around a visiting family member, so he jumped on that grenade, allowing Mibuwulf to come.

The weather was supposed to be great. No rain was expected, and the temperatures weren’t too low, although they were in that annoying range where they keep going above and below freezing. When we started out it was a brisk 27F (-3C).

We gathered at the trail, and headed up the mountain. Two of us brought our dogs along for the trip. I brought Rhea, who is camouflaged in the picture below. She looks like a toy dog, but I have been taking her into the woods with me since she was a few months old, so she does great. 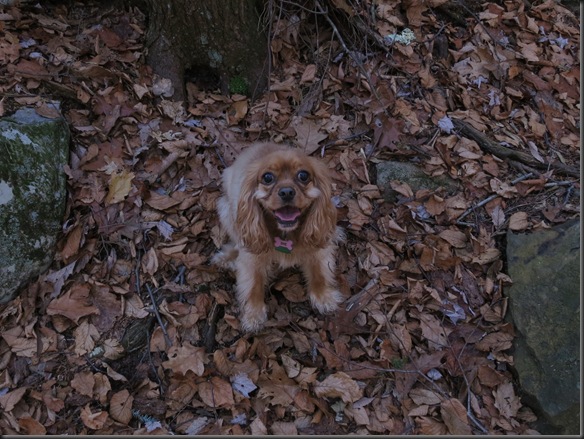 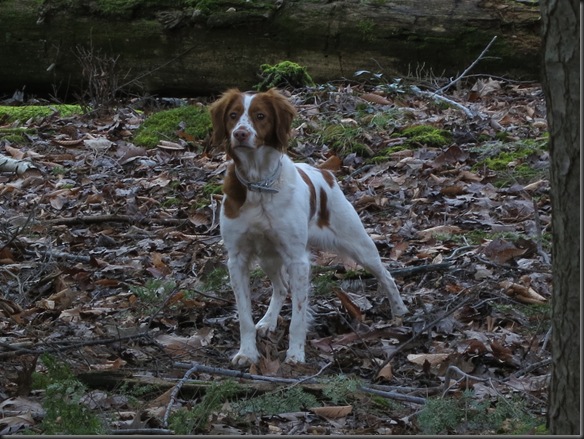 There was some scrambling to be done right off the bat, but the dogs kept up well. 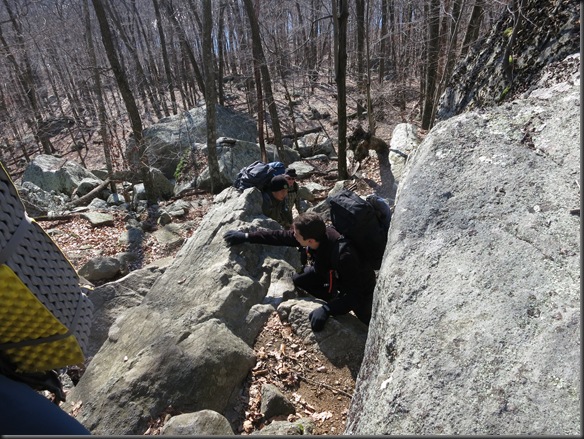 The great thing about this area is that while the elevations are not high, there are some wonderful views because you can climb above tree line very quickly. 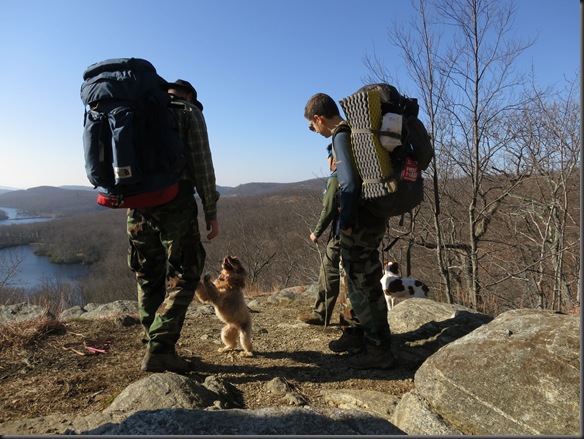 Here we had our first opportunity for a group photo, although the harsh sunlight is not a friend of the camera. 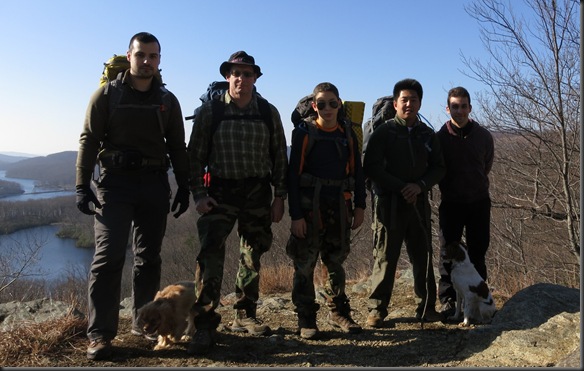 The hurricane had done some damage to the area, although all the snow we had last week had completely melted. 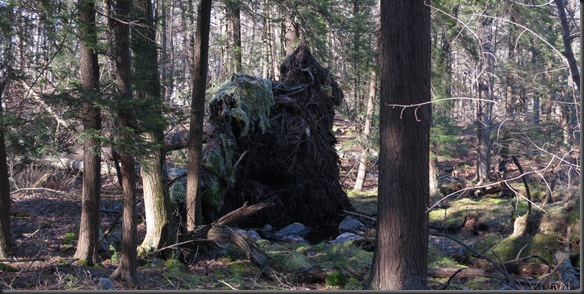 While we were still within the tree line, we decided to stop and have lunch. 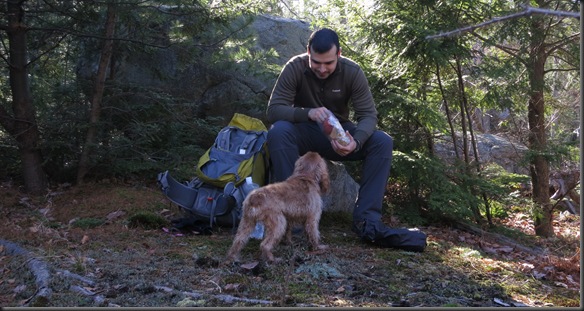 After a short stop, we got back on the road and proceeded up the mountain. From that point on the trip was all above the tree line, where the wind picked up sharply. Luckily it was relatively warm in the sun, especially when we were moving. 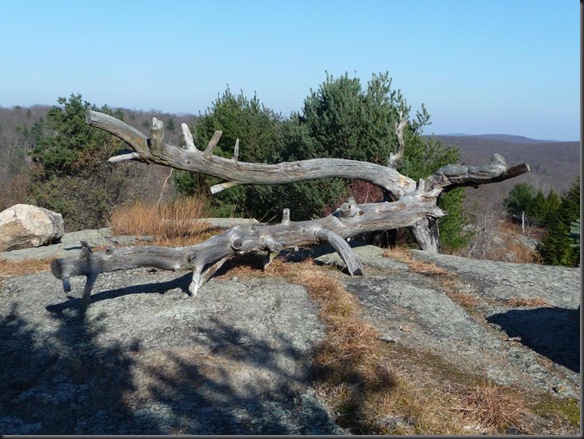 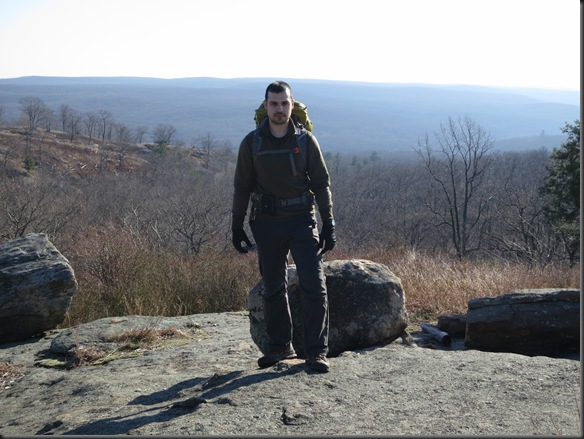 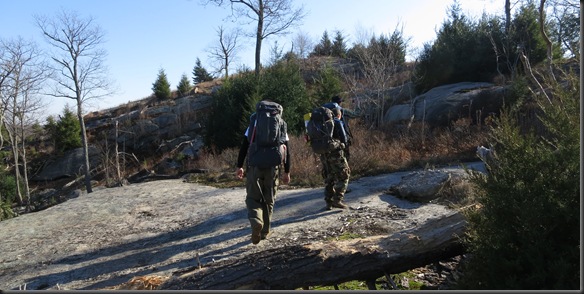 We managed to spot a few deer as well. Later in camp we saw an eight point buck (according to Mubuwulf who said he was counting) running up the side of the mountain, but there was no time for pictures. We did get a few pictures of a smaller doe who seemed to pay little attention to us. 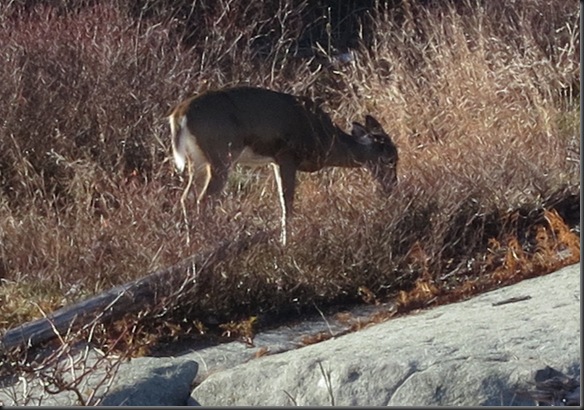 Along the way we passed by a rock outcrop called “ship rock”. We tried to climb it. Most of us made it to the same spot up the side of the rock before losing our nerve. You can see Son O’ Beanbag giving it a try here. 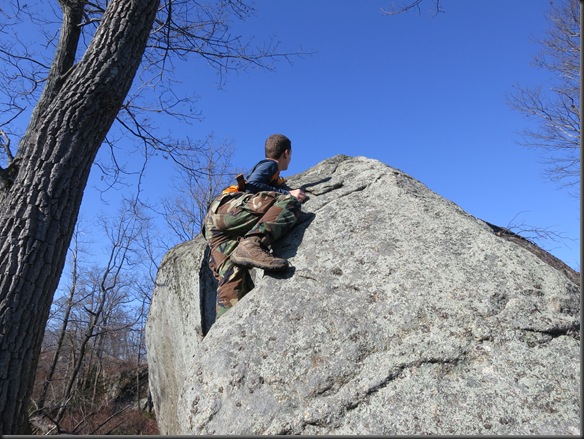 The only one of the group who managed to reach the top was Terahz, who has rock climbing experience. 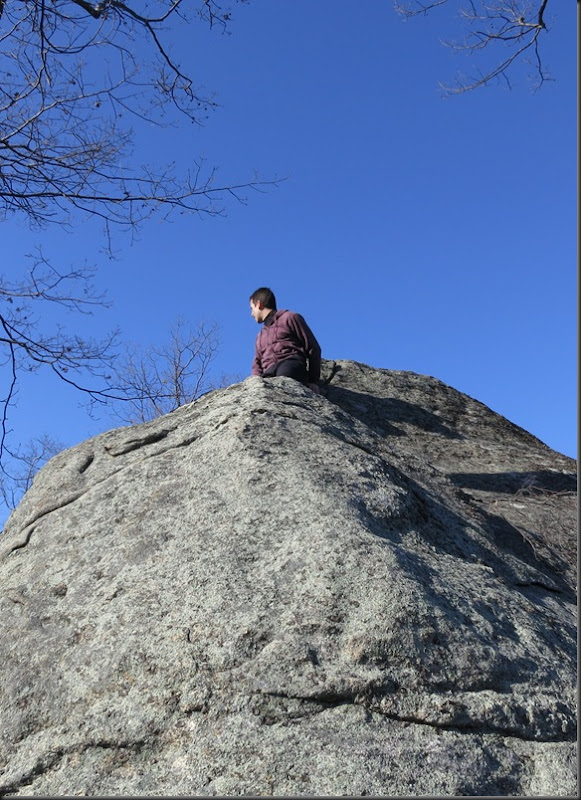 After some more hiking up the mountain, we reached the area where we had planned to camp. We decided to go down the mountain into a small valley below the tree line. We hoped to find water there and some flat terrain sheltered from the winds. We lucked out and found exactly that. 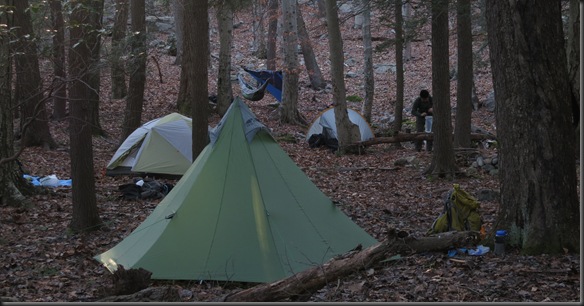 It was getting late, and the temperatures were starting to drop. I pulled out my heavier jacket, the Patagonia DAS parka. 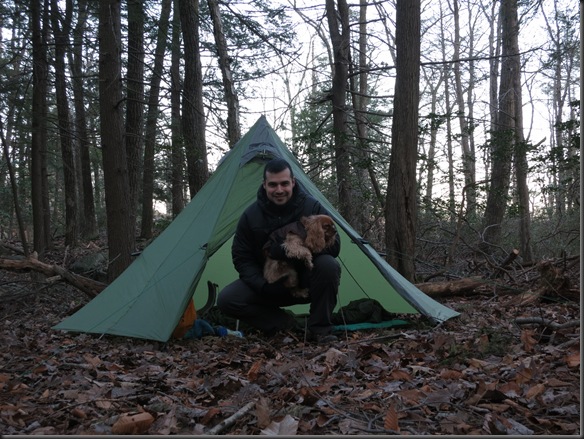 Rhea was also wearing her coat. She is pretty good with the cold, but I don’t want her to be shaking the whole time. 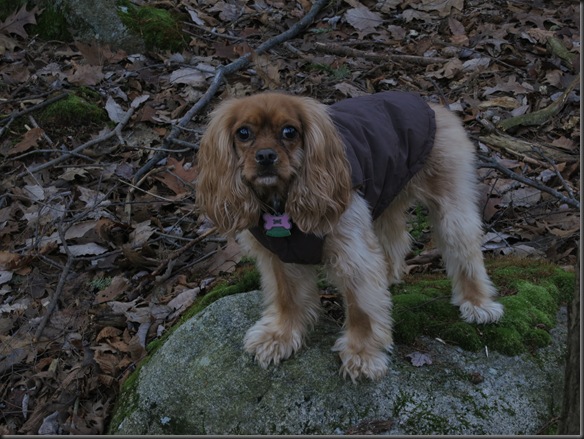 I was using the winter set up for the Shangri-La 3 just for practice. It includes additional lines to the side of the tent for added wind and snow load resistance. I recently started using these figure nine tightening mechanisms, which have been working well and allow me to use thinner line than if I was using friction knots. 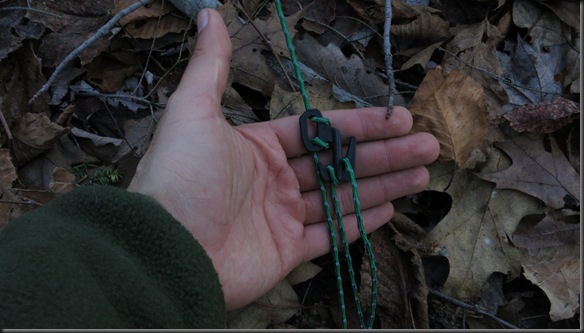 The rest of the evening was spent gathering fire wood. After that we settled down around the fire, ate dinner, and exchanges stories. Some of the guys were waiting for a meteor shower that was supposed to start at midnight, but I only lasted till 10pm before going to bed. That was much better that my usual going to sleep at sundown routine. 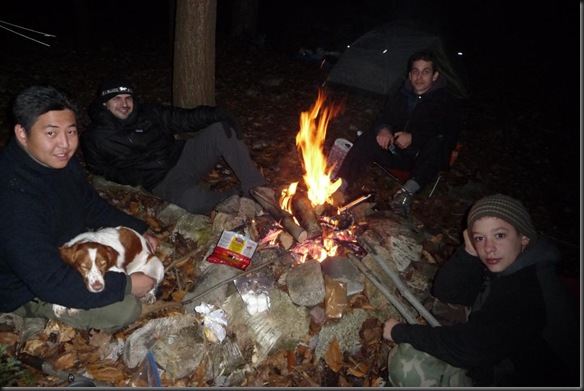 The smartest person in the group was Terahz, who brought a lightweight chair to sit in. I brought a piece of closed cell foam that I use as a seat during cold weather.

The night was not too bad. The lowest temperature for the area was 24F (-4C). The biggest issue was a pack a coyotes that kept howling all night. We were not sure how close they were, but it wasn’t far. We were more worried about the dogs. If they decided to chase the coyotes, they would certainly be killed. Fortunately, the night passed without incident.

In the morning we made breakfast. On an unrelated issue, everyone was very amused by my pee bottle (a folding 48oz Nalgene bottle). I find it to be essential during colder weather. The guys didn’t see it that way. 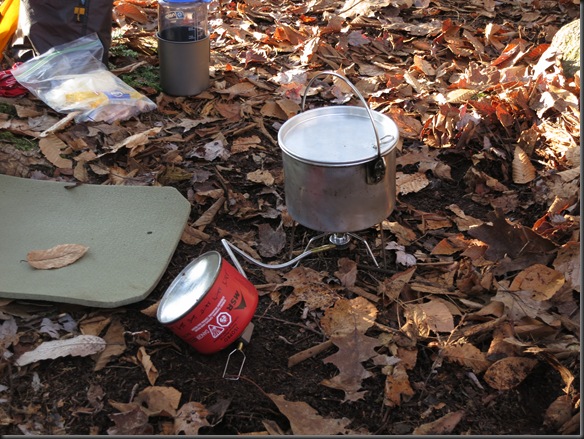 All of the gear performed well. I was happy with the Shangri-La 3 as well as the Kovea Spider stove. I also filtered some water in the morning with my Sawyer Squeeze filter. I kept it in the sleeping bag over night to keep it from freezing. I can’t wait until we get enough snow for me to start melting and leave the filter home. 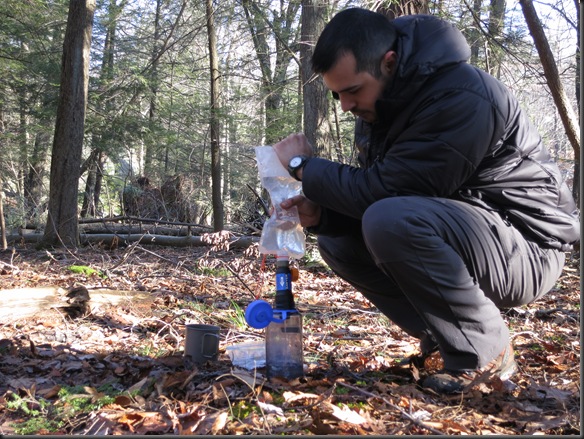 After packing up, it was time for a group photo, and we were on our way. 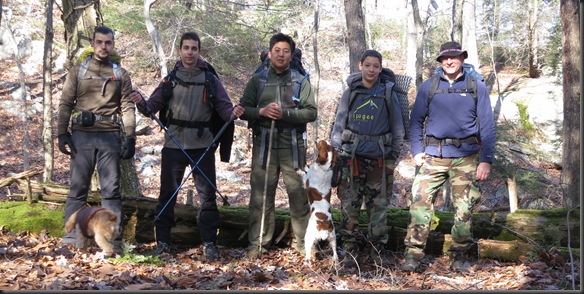 On the way back, we encountered some more deer. This time Roxie took off after them. It was quite some time before she came back, so we had to wait. Upon her return she had to wear the leash of shame. 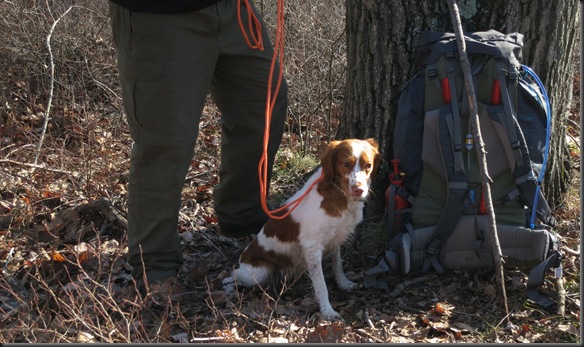 We also ran across several old 19th century mines. Most of them were just cuts in the rock. One of them seemed much more elaborate. 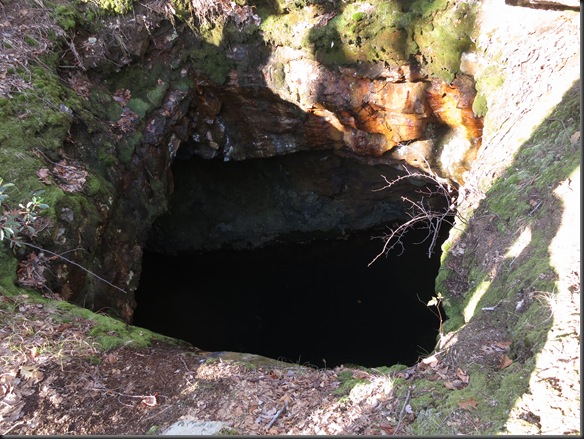 Around noon we stopped for lunch. We found a nice spot near a lake. The wind however was very strong, making us glad that we found that small valley the previous night. 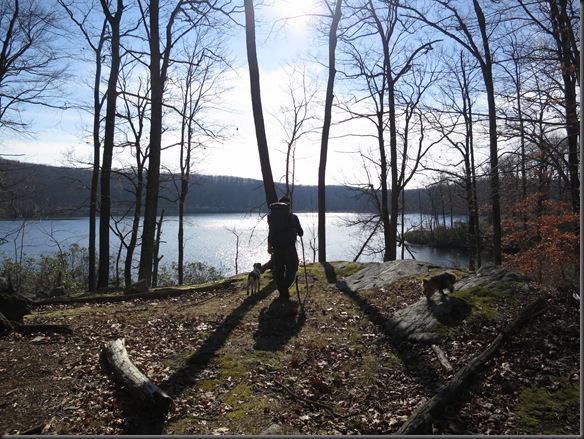 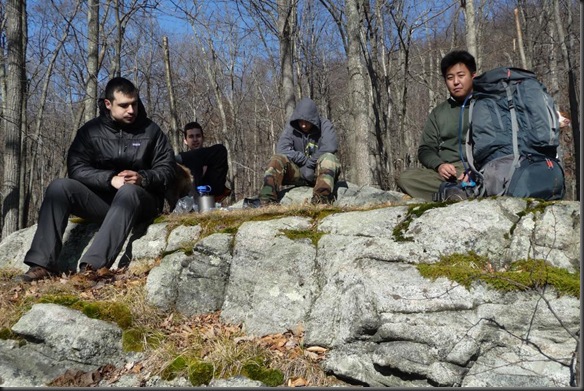 After lunch we followed the trail out, completing the loop. Here is what it looked like from the GPS recording. 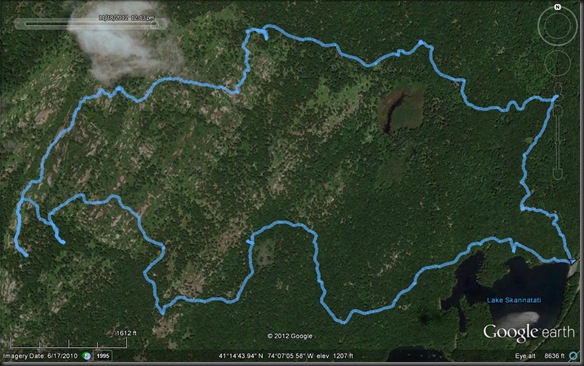 It was a good trip with good friends. It was exactly what we wanted it to be. It wasn’t too stressful, but at the same time kept us working for most of the time. I’m sure the next one will be just as much fun.