So, you guys know that I am skeptical about most things that I can’t confirm through personal experience, so I have been doing some testing with different types of clothing. Last year I wore only wool clothing as insulation all year round, and became skeptical about its alleged properties as a result of my experiences. You may remember I put together a small test to see how well wool retains its insulation when wet. You can see the test here.

A few days ago I posted the same experiment repeated with Merino wool. The results were virtually identical, and you can see them here. Please note that the significant measurement here is the difference in insulation between the fabrics when wet and dry. While in this experiment the two articles of wool clothing were almost the same, we should try to avoid direct head to head comparisons unless the materials were produced to identical specifications for purposes of the test. A thin material will certainly lose more heat than a thick one.

Well, as you know, I was without power for a few days, without much to do, so it gave me time to do some more of these time consuming and very boring tests. The material I chose to tests was fleece insulation, and answer the corresponding question, does fleece keep you warm when wet? For the test I chose a regular 200 weight Polartec fleece top because it was similar in thickness to the wool caps used in the previous tests. The test was performed in the exact same way as the one outlined for the wool clothing, except that for the wet material, only an initial wetting test (2) was done to save time.

Before starting each of the tests, I performed a control test without any insulation. Since the measured temperatures were very similar to the ones shown in the earlier wool tests, I have used the original “no insulation” numbers to make comparison easier. 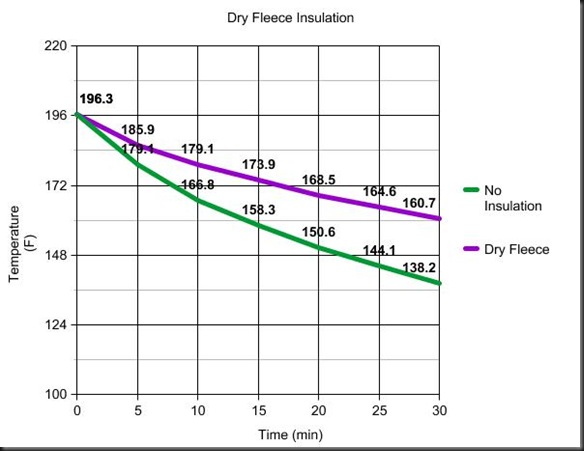 Just for ease of reference, here is the old graph of the “dry” results from the wool insulation. 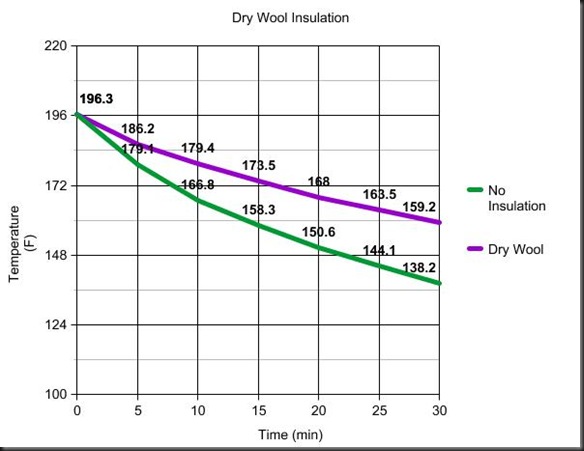 Despite the fact that we should not make direct comparison between the two materials because there are too many variables, it is hard to ignore that the lines look almost identical. It would appear that 200 weight fleece has about the same insulating power as a knitted wool watch cap when dry.

When the fleece insulation was wet, its ability to retain heat decreased as expected. Here you can see the chart showing the dry and wet fleece test results. 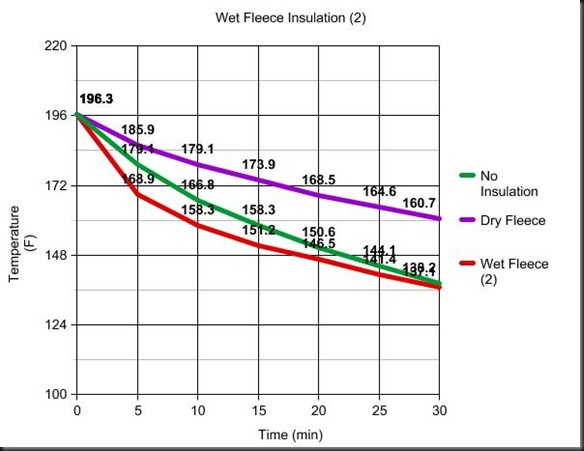 Again, for ease of reference, here is the old chart showing wet wool insulation (when only initially wet). 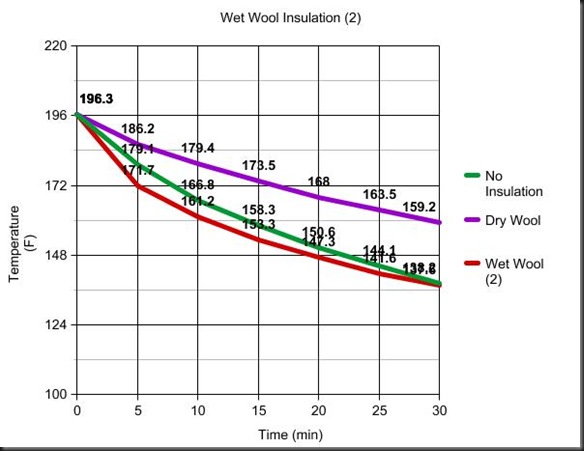 The results again seem very similar. Both wool and fleece lost significant amounts of insulation when wet, and in fact provided less insulation when wet than the try container with no insulation at all. As the material dried over time, the insulation improved. I don’t think we can say that either material keeps you warm when wet. If you are thermally regulated with the clothing you have on, such a significant drop in insulation will get you in trouble if the temperatures are low.

Equally noteworthy however is the fact that the two materials performed in very similar manners both when dry and wet. Assertions about wool keeping you warm when wet while “synthetics” not doing so, appear to be unsupported.

Another important part of the test, although not one that I initially set out to test was the drying time of the pieces of clothing. For the wool cap it tool almost two day (nearly 45 hours) to dry. The merino wool cap took close to 50 hours to dry. The fleece shirt on the other hand was dry after about 5 hours. The drying time was just incredibly faster. Of course, that is to be expected as fleece fibers do not absorb any water, while wool fibers can absorb close to 30% of their weight in water.

This additional aspect of the fabrics however raises a question about the above heat loss registered in the tests. It is often postulated that the faster drying time of synthetic materials is what causes them to “make you cold”. After all, if you have two materials that have absorbed an identical amount of water, and one dries in half the time, then all of the energy lost in the evaporation process would have been expanded in half the time, i.e. higher heat loss. So, why isn’t the fleece test showing  faster heat loss even though the fleece dried faster? Well, if we look closely enough, it is. You will see a larger initial dip in temperature with the fleece insulation than with the wool one, although the fleece caught up by the end of the test. Of course the difference seems small when compared to the overall decrease of insulation in both wet fabrics, but it is there none the less.

Keeping this in mind though, I think there are two things to consider here.

The first is that the evaporation of water from a material is only part of the cause for heat loss. There are several aspects, including the loss of dead air space due to water occupying the area, and collapse of the fabric material due to the added weight. Rate of evaporation will not effect these aspects, except in that the faster water evaporates (is removed) from the material, the better the insulation will get.

The second is that all materials do not absorb the same amount of water. While the same amount of water may be poured on a material, with something like fleece, where the fibers themselves absorb virtually no water, much of that water will simply drip out rather than evaporate. I think this is perhaps the greatest factor in explaining how a material can dry faster than another without any appreciably increase in the heat loss.

The faster evaporation rate will probably become more noticeable when we are dealing with very thin materials such as base layers, that have become damp due to sweat. The synthetic material will dry faster, which initially cools it down more quickly, making it feel “clammy”. Over time however, as the materials dry, the synthetic fabric will gain its insulating ability back much faster. As the materials increase in thickness, their water retention will increase exponentially, giving us the results we see above.

In conclusion, I suppose it is not surprising that the two materials, wool and fleece, tested very similarly when dry and when wet. After all, fleece was designed as an artificial substitute for wool. If I had to offer an interpretation of the data, I would say that both materials loose significant insulation when wet. Your best betfor staying warm, as always, is to stay dry. Fleece dries much faster than wool (in this thickness), and as a result loses heat faster upfront, although then it regains it faster than wool over time. If you think you may get wet and will be in the woods for a short period of time, wool would be a good choice. Since it dries slowly, it will lose slightly less heat than fleece when initially wet. If you can get indoors to dry it out fairly soon after getting wet, it would be a good choice. On the other hand, if you will be in the woods for an extended period of time, the faster drying time of fleece will give you better overall insulation because It regains its full insulating ability much faster than wool. Anyway, all of these interpretations are rather academic. Your time is better spent figuring out how to stay dry than worrying about which fabric to wear. If you get wet, you will be cold in either one.