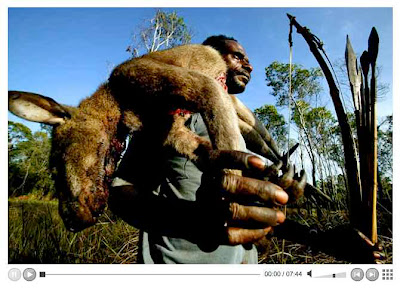 Photograph © Brent Stirton/Courtesy The New Yorker
For some reason, the New Yorker magazine's website decided to feature an audio slideshow titled Tea & Wallaby, in which some photographers describe memorable meals they've had whilst working in the field. John Stanmeyer talks of chai, Rena Effendi of a gruesome-looking sheep stew, Carolyn Drake of pears in Uigur-land and Stephanie Sinclair of her favorite eating place in Beirut.

Just to add my two cents' worth to this mix:

On a self-assignment in Chhattisgarh (central India), I ate red ant chutney which is a delicacy favored by the indigenous Adivasi of the region. The red ants carry a sort of venom, and when prepared into a chutney, it adds a “je ne sais quoi” sting to one’s palate. It wasn’t bad…it had just added different kind of “zing” to the meal. The tiny critters were somewhat crunchy as well.

The other staple food that ranks high on my “avoid” list is injera; the spongy, sour flat bread of Ethiopia. Its period of fermentation gives injera a sour taste, which may well be an acquired thing. I tried to acquire the taste while on a photo-trip to Ethiopia but found it was impossibly unpalatable.
Posted by bella at 4:03 AM