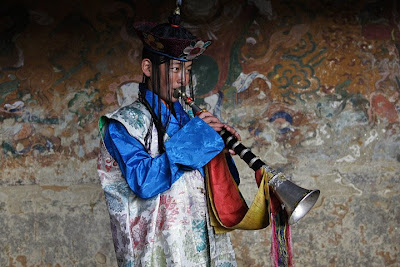 The ceremony was held in Thimpu's Tashichho Dzong, a 17th century white-walled fortress that serves both as administrative headquarters and a monastic center. Bhutanese came from all over the country for the ceremony, including nomadic yak herders who trekked for days from the icy Himalayan mountains of northern Bhutan, as well as members of the country's Hindu minority.

While traveling in Bhutan earlier last month on my Land of the Druk Yul photo-expedition, we saw frenetic activities for this coronation. Unfortunately, I don't know its Dzongkha equivalent, but I extend my congratulations to Bhutan.

The above image is of a Black Hat dancer practicing on a ceremonial trumpet at the Tamshing tsechu last month.

Update: For photographs of the coronation, including some by Paula Bronstein of Getty Images, visit The Boston Globe's The Big Picture.
Posted by bella at 5:34 AM